By design on January 10, 2021Comments Off on Vaccination turnout larger than expected 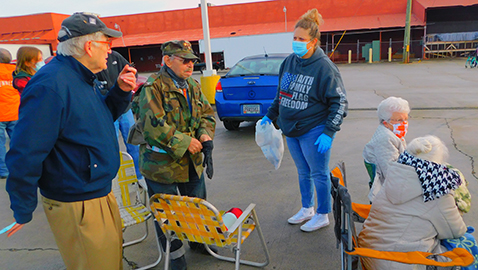 Recently a line of hopefuls stretched totally around the large Expo Center in North Knoxville. The facility  wasn’t hosting a flea market or political rally but a vaccination clinic for qualifying people to get the first of two COVID-19 shots.

Knox County has been a center for huge increases in positive testing and deaths in recent weeks and months.

The Knox County Health Department had announced the clinic days before the Saturday, January 2 event and quickly discovered that morning that there were more citizens there than the 500 shots available. As the 9 a.m. opening neared, the long line, which started before 7 a.m., stretched from the main entrance to around the large building with two or three loop-back lines and extended at one time to the front of the nearby Weigel’s Store.

The clinic was open to medical professionals, like care-givers and first responders, and any senior 75 or over. Within the line were younger first responders and seniors who were on walkers, in camp chairs and wheelchairs and on foot. Although social distancing was tried it became apparent that many of the citizens, all who wore masks, were not following those distancing guidelines.

When the door opened for shots the qualifying 500 people were counted and the rest in line were dismissed. Some estimates had the crowd at between 750 and 1,000 people.

As each individual entered the building their temperature was taken, questions about symptoms were asked, and each was given a form to complete. After receiving the vaccine each person was asked to wait 15 or 30 minutes to make sure there was no reaction. Some of those who received the shot were asked by The Focus if the wait was worth it and all said “Yes.” People who had a severe reaction to vaccines in the past were encouraged to not take the shot. A second shot will be required of those who received the vaccine.

By the turnout it was obvious that most people approve of getting the vaccine. Some complained about having to stand in line and noted that some other counties were giving shots in a drive-thru event where people could stay in their cars. Knox County had been doing drive through testing at the Health Department and other locations on various days and hours and that information is available on their website.

Dr. Buchanan reminded the public that the event is only the first of other events to be planned by the health department. She said that taking part in the first of the public immunization event was voluntary and more events will be planned when more vaccine has arrived.

Last Thursday, the health department released a statement that said in just over two weeks, they had vaccinated nearly 4,000 people. The statement went on to acknowledge future efforts:

As calls increase, the department is working to add more phone lines to the Public Information Line (865-215-5555) and offer online registration for vaccination appointments. Additional information will be released as it is available.

KCHD continues to vaccinate those in Phases 1a1, 1a2 and those 75 years and older. Phase 1a1 includes in-patient health care providers, first responders with direct exposure to the public and staff members and residents of long-term care facilities. Phase 1a2 includes those primarily working in outpatient health care settings. The full outline of Phase 1a1 and 1a2 groups can be found in the statewide plan.

Residents and staff of long-term care facilities will receive their vaccinations through a federal partnership with select private pharmacies – not KCHD.

“Until experts fully understand the protection a COVID-19 vaccine provides, it remains incredibly important that everyone, regardless of vaccination status, continues to practice the Five Core Actions in every setting,” said Dr. Buchanan. “These measures, if practiced consistently, will reduce the burden of disease in our community.”

Vaccination turnout larger than expected added by design on January 10, 2021
View all posts by design →