By design on September 15, 2019Comments Off on Valiant comeback effort falls short for Webb 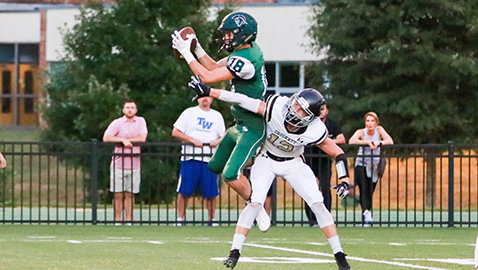 The losing streak reached three games for Webb School of Knoxville Friday night and for the second consecutive week the Spartans came up on the losing end of a 28-21 decision.

“Against Boyd Buchanan (on Friday, Sept. 6) we didn’t play well. We played poor football but tonight, I thought we played good football,” Meske said after the Spartans fell 28-21 to David Crockett Friday night before a packed and spirited house at David Meske Stadium. “I was pleased with our effort. We had three turnovers and they hit us with a few big plays.

“These kids work hard and they’re never going to quit. They’re raised not to give up. That’s how they’re brought up in this program.”

The Spartans (1-3) have now dropped three straight games after edging Austin-East 3-0 in their season opener last month. But Meske found plenty for his team to build on after its most recent setback against the Pioneers (3-0).

“We can build on this. If we have this kind of effort, without the mistakes, we’ll win some ballgames,” he said.

Webb’s defense set the tone early when it forced the Pioneers in to a three-and-out after the Spartans got the ball first and picked up a first down on their initial drive.

But David Crockett picked up a turnover on Webb’s second possession when Donta Hackler intercepted a pass from Spartans’ quarterback Joseph Moore and returned it to the Webb 35-yard line with 5 minutes, 19 seconds remaining in the first quarter.

David Crockett extended its advantage to 14-0 when Larkins connected with Hackler on a 39-yard touchdown pass with 10:33 left in the second stanza.

The Spartans trimmed their deficit in half when junior Elijah Bane scored on a 1-yard plunge with just over eight minutes remaining before halftime.

Webb had a chance to pull even just before the break. The Spartans got the ball midway through the second quarter and engineered an 11-play, 42 yard drive. They were headed into the end zone when they lost a fumble in the waning seconds of the second stanza.

The Pioneers struck quickly after halftime. After David Crockett returned the second-half kickoff to the 27-yard line, Larkins hit Hackler with a 57-yard bomb that moved the ball to the Webb 14. After a penalty, Larkins culminated the scoring drive with a pass to Prince Kollie to make it 21-7.

But the Spartans would answer when Bane scored his second TD of the night on a 6-yard run to make it 21-14 with 17 seconds to go in the third quarter.

David Crockett regained its 14-point advantage early in the final frame when Ronquille Jordan scored on a 3-yard run.

Webb then pulled to within 28-21 when Moore threw a 45-yard scoring strike to Jackson Baker with 8:04 remaining.

Webb made a late defensive stand and had a chance for a potential tying touchdown but the Spartans saw their hopes evaporate with their second fumble of the game.