By design on December 16, 2018Comments Off on Visiting the old Tellico Blockhouse 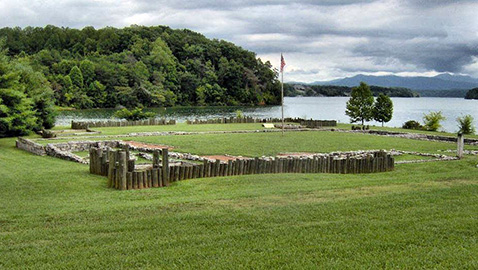 You probably know about the mass Cherokee removal known as the “Trail of Tears” but I’ll bet you have no idea of the many treaties drawn up with that tribe that moved them out of East Tennessee. Those treaties led eventually to the U. S. Military setting up removal camps and forts and then rounding up those Native Americans and forcing them to move to Arkansas and other more western states.

East Tennessee is dotted with forts established by treaties where the U. S. and Tennessee agents oversaw the Cherokee villages. Basically that started with the establishment of Southwest Fort in Kingston and eventually to an agency in Charleston, Tennessee. In between there were other forts that followed the Cherokee as they moved further and further southwest because of treaties.

There were agency forts at Hiwassee Garrison near Dayton and at Agency Creek south of Decatur. While Southwest Fort and the earlier founded Fort Loudoun have been basically rebuilt, only one fort has its original footprint and you can drive to it and walk the same grounds as the soldiers and Native Americans did.

Tellico Blockhouse is just an hour south of Knoxville near Vonore, Tn.  You can literally drive right down to the fort by taking Highway 411 just east of the Vonore Lake bridge and taking Clearview Drive south to Blockhouse Road.

The blockhouse park is administered by the staff of Fort Loudoun and located across the lake from that much-earlier frontier fort.

Far before Vonore was even founded, Cherokee populated several towns along the waters of the Little Tennessee River. From Coyatee near the current Tellico Village, to Tanasi far up the river near the North Carolina state line, many towns were located along the river or nearby. Villages considered as part of the Overhill Villages included Great Tellico on the Tellico River, Mialoguo, Tuskegee, Tomotley, Toqua, Chota, Chilhowee and Tallassee. Just below them was the Great Hiwassee township.

The villages are now covered by the waters of Tellico Lake but lots of archeological work was done there prior to flooding. Only the blockhouse complex remains where it was originally located, above the lakewaters.

The Blockhouse was built and used by the agency moving from Southwest Fort and the Hiwassee Garrison. It was built and manned by troops in 1794 and operated until about 1811. The fort served as a passage point for whites traveling into Cherokee territory and the commander served as the Indian Agent.

Cherokee who wished were supplied with spinning wheels and taught weaving. The tribe grew cotton nearby and the fort was also a center of trade for hides, skins, and other items. Today after several years of archeological research and digs the foundations of the various buildings, walls and a well are again in the open air and you can visit them. The site is on the lake and, unlike Fort Loudoun, is original and has not been removed from its original location.

The blockhouse has an odd connection with Knox County and Knoxville. When built on the edge of a shrinking Cherokee territory, an order to “civilize” the tribe was given by Henry Knox, George Washington’s Secretary of War. Knox was responsible for all the relations between Native Americans and the national government.

A warm day in the winter is a great time to get outside and take the family to learn more about our area. Vonore is a nice little town and you will find that most of the original town is off the highway to the north. Fort Loudoun State Historical Park and Sequoyah’s Birthplace Museum are just south of Vonore.

You can get more information about Tellico Blockhouse and Fort Loudoun by calling (423)884-6217 or by visiting those sites on the internet at www. tnstateparks.com/parks/fort-loudoun. Both sites are also on Facebook.

Visiting the old Tellico Blockhouse added by design on December 16, 2018
View all posts by design →