By design on October 11, 2020Comments Off on When visiting Sgt. York Park don’t forget ‘Coonrad’ 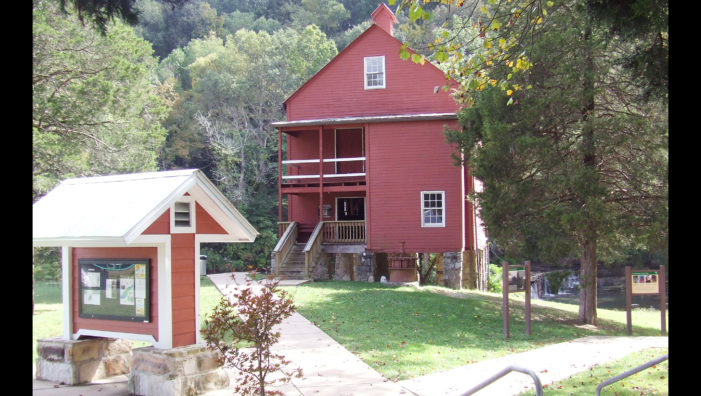 The Sgt. Alvin C. York State Historic Park is about a two-hour drive from Knoxville, depending on what route you take, and is well worth a visit. There are lots of interesting sites to see along the way if you wish, like Brushy Mountain Prison, Frozen Head State Park and Wartburg to name a few.

My wife and I visited the park years ago and were, to our surprise and delight, given a tour of York’s home by one of his sons, Andrew.  Today state park rangers offer tours of the home, built for the WWI Medal of Honor recipient, for a small admission fee. You can also donate and have a ranger show you the various sites around Pall Mall, York’s small hometown, including the family church, York Bible School, a gift shop and the family mill and cemetery.

Recently we revisited the York home place and took a self-guided tour by car around a loop that brings you back to Pall Mall and the family mill. There are picnic tables and a pavilion there along with modern restrooms.

The visitor center, located in the old York grocery store, provides a brief video presentation that tells York’s story as a war hero but, more importantly, also tells of his life after the war which he devoted to his community, promoting education locally and nationally, and championing progressive causes.

While much is known about Sgt. York, there’s very little about his great-great-grandfather, Coonrad Pile (or Pyle), who settled the area long before statehood. He was a long hunter who discovered a spring and cave on the site and claimed the land. He’s buried in the Wolf River Cemetery in the older section across from the grave of Sgt. York and the York family. Coonrad’s grave is “above” ground and elevated with stones surrounding it.

Conrad, who preferred to be called “Coonrad” to distinguish him from a grandson of the same name, brought his family there and built a huge log home, with one room with no windows and only one door, where he stored his weapons and a growing amount of wealth.

At one time he owned most of the land including parts of nearby Jamestown, Tennessee. He was a slave owner, a merchant, owner of the store and flour mill, and built the road leading into Pall Mall. Had it not been for his great-great-grandson Coonrad may have been the most famous person from those parts.

The little Fentress County community of Pall Mall was not named for the cigarette brand but for Pall Mall in England.

The Sgt. York State Historic Park is open to the public and you can best reach it off Interstate 40 West at Highway 127 North. You may also call the park at (931)-879-6456 or visit www.tnstateparks.com. One interesting installation at the park nowadays is a war trench that gives visitors an example of what World War One was like for soldiers.

The Sgt. York home can be visited at certain hours during the day.

Most of the park is free to visit but there is a small fee to visit the York home. One tip: the area is in the Central Time Zone so you may want to get there in the morning to have enough time to see everything there. On your way back you may want to turn off the highway and drive through Historic Rugby or venture into the Big South Fork Recreation Area. Just north of the park is the Cordell Hull Birthplace State Park and Pickett State Park is about 25 miles away.

Getting out with the family is a great stress reliever and you never know what you may discover.