West avenges loss to Powell, gets Central next

By design on November 24, 2019Comments Off on West avenges loss to Powell, gets Central next

PHOTO BY TRACY HEARD. West's Isaiah Mattress gets a block from his offense line as he carries the ball against Powell in their Class 5A quarterfinal rematch Friday night in the Jungle. Trying to fight off the block is the Panthers' Cannon Lusby (32). The Rebels came out on top this time 31-14. 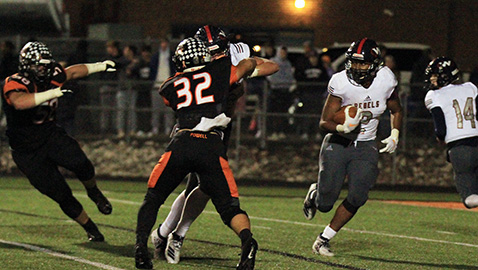 West High School avenged its lone loss of the 2019 football season Friday night and the victory has landed the Rebels in the Class 5A semifinals.

The Rebels were simply dominant as they ran past previously undefeated Powell 31-14 on a chilly and misty night at Scarbro Stadium.

West picked up some revenge as it evened the score with the Panthers, who won the regular-season matchup 21-20 in overtime.

That was a heartbreaking loss for West but the Rebels have been resilient all season according to second-year head coach Lamar Brown.

“I’m proud of this group. They’re a great group of young men and they just find a way every week,” Brown said. “This feels great and I’m really happy for our kids.

“This group has done everything we’ve asked. I’ve coached 20-something years and this group is special.”

On this night, the Rebels didn’t have to worry about working overtime and they never really let the Panthers get off the deck.

West got off to a fast start and never trailed in this one.

Powell took the ball after the opening kickoff and quarterback Walker Trusley lofted a pass that was deflected by West safety John Cupp into the waiting arms of Jack Eggleston.

From there, West took possession and scored on its first play from scrimmage when Isaiah Mattress rumbled 27 yards for a touchdown. Tyson Siebe, a freshman, kicked the extra point to make the score 7-0 with 11 minutes, 43 seconds remaining in the first quarter.

Siebe, who kicked a 31-yard field goal just before halftime, was only one freshman to have a big impact for the Rebels, who travel to face defending Class 5A Champion Central this week at Dan Y. Boring Stadium in Fountain City.

Freshman running back Jai Hundley had 133 yards on 16 carries and scored his squad’s second touchdown on a 3-yard plunge that culminated a 97-yard drive.

The Panthers pulled to within 14-7 when Trusley threw a 50-yard scoring strike to Tyler Kirkess.

But Powell’s joy was short-lived as West regained its momentum when Omarian Wright took the ensuing kickoff and scampered 92 yards for a touchdown to make it 21-7 before Siebe’s late second-quarter field goal gave the Rebels the 17-point advantage it enjoyed at halftime.

Brown said that the field goal loomed large for his team.

“Tyson Siebe is a freshman and he came in here and earned a starting job as our placekicker,” Brown said. “That field goal was big for us just before halftime.”

After the break, Powell’s defense stiffened and forced the Rebels to punt on three consecutive possessions despite giving West the ball near midfield.

Powell did pull to within 24-14 on Trusley’s 28-yard touchdown run with 6:24 left in the third quarter, which capped an eight-play, 93-yard drive.

The Rebels added a late touchdown run by Mattress, who had 123 yards and two touchdowns on 19 carries.

West avenges loss to Powell, gets Central next added by design on November 24, 2019
View all posts by design →