By design on July 10, 2016Comments Off on A DAY AWAY: Who built state parks in Tennessee? 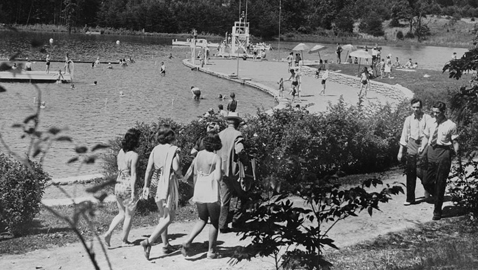 As I’ve written before, my wife and I have visited all but one of the 59 Tennessee State Parks and what surprised us was the number that were created by the Civilian Conservation Corps (CCC), a national program that only lasted about nine years.

The CCC was the most popular program of President Franklin Roosevelt’s “New Deal” effort that pulled the nation out of the Great Depression and prepared the country for the coming conflict of World War II.

In the Knoxville area there are several CCC created parks you can easily visit within a day’s drive and each of them still has a hint of the work and effort to build the public attractions. Some were created in conjunction with TVA’s lakes.

Parks near Knoxville include Big Ridge State Park east of Clinton near Andersonville, Cove Lake State Park just off I-75 between Caryville and Jacksboro, Frozen Head State Park near Wartburg, and Norris Dam State Park near the historic town of Norris and the TVA Dam. The CCC was also active in helping create the Great Smoky Mountain National Park, the most visited park in the nation.

You can find bits and pieces of the CCC construction at most of the parks including the dams they constructed, foundations of buildings that housed the workers, and even some occasional cabins the Corps built.

At Frozen Head State Park, just across the mountain from the former Brushy Mountain Prison, you might even find the Dynamite Shack built by the men. The dam at Big Ridge State Park was a CCC project as was most of that park and Norris Dam has 19 cabins built by the organization that are still rented to visitors.

The CCC not only hired out-of-work men, some 3 million of them across the nation, but provided training, food and lodging. The men were paid about $30 each month and $25 of it was sent home to their families. Initially all men between the ages 17 and 28 were taken into the program regardless of race and most served for at least six months. Preference was given to WWI veterans

Eleven CCC districts operated in Tennessee, one of them in Knoxville, and 15 branch offices were established. The applicants had to prove their unemployment status and other qualifications. The CCC promoted “select rather than collect” for its workers.

The training the men received would be used in their later lives and many of the CCC men went on to serve the United States in the coming war.

Eventually the CCC supported 46 camps across the state and built, among other projects, eighteen parks. In the nation the Corps worked to create or maintain 800 state and national parks and taught the unemployed young men firefighting, natural resource management, and other skills.

A DAY AWAY: Who built state parks in Tennessee? added by design on July 10, 2016
View all posts by design →