By Dr. Jim Ferguson They say that people look like their dogs.  That’s obviously an over statement, but I have to admit I’ve occasionally noticed some resemblance in folks who walk their dogs in the neighborhood.  For a long time I’ve observed that a doctor’s medical practice is a reflection of his attitude and care.  […]

By Ralphine Major Growing up, they were neighbors. They played on the Gibbs High School basketball team and walked home together after practice every day. For David Widner and Tommy Everette, home was in the Ritta Community. Widner has appeared in earlier Focus columns. Everette played center for Coach Bob Dagley. The coach recalls the […]

The Patience of Bruce Pearl

By Alex Norman Bruce Pearl is waiting… just as he has been since March of 2011, when he was relieved of his duties as Tennessee men’s basketball coach. In August of that same year, the NCAA slapped a three-year show-cause penalty on Pearl, stemming from recruiting violations in the now famous “Aaron Craft BBQ” saga.  […]

By Rosie Moore How many of you remember “Calvin and Hobbes”? I imagine quite a few of you do, especially those who had children who enjoyed their antics when they were young. A comic strip about a boy and his imaginary friend, it was created by Bill Watterson. He was born July 5, 1958 in Washington, D.C […]

A Day Away: Tennessee’s Second Governor

By Mike Steely How does history treat you when you are second at something? Poor Archibald Roane, Tennessee’s second governor, might be able to tell you. Who can follow up John Sevier? Roane could, but he only with one term. Sevier had been elected and reelected and could not run for a 4th term when […]

By Joe Rector It’s those sounds from childhood that stay with us for a lifetime. Even when every curtain in the house was pulled and the only light on in the house was the one in the bathroom, we boys knew when Daddy came home. It was that sound of white gravels in the driveway […]

Publisher's Position: The business of politics

By design on November 4, 2013   From the publisher's desk, The Daily Focus 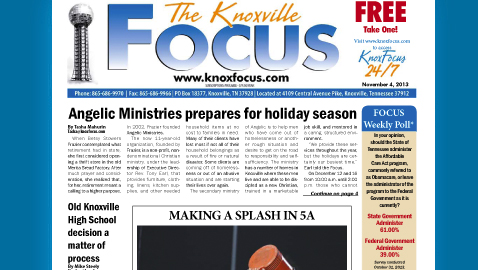 Click here to view this week’s Focus. Angelic Ministries prepares for holiday season By Tasha Mahurin Tasha@knoxfocus.com When Betsy Stowers Frazier contemplated what retirement had in store, she first considered opening a thrift store in the old Merita Bread Factory. After much prayer and consideration, she realized that, for her, retirement meant a calling to […]