By design on January 17, 2016   Archives, Columnist, Stories In This Week's Focus:, Williams 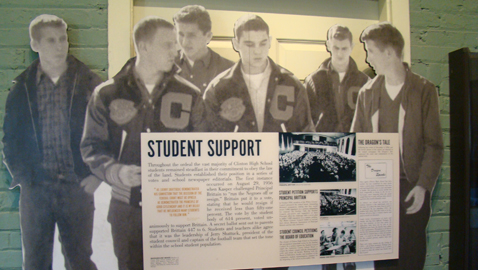 By Steve Williams I am proud of the hometown I grew up in and the high school I graduated from for a unique reason, and with this being Martin Luther King, Jr. Day, there’s no better time to express these feelings. Clinton High was the first state-supported public school in the Southeast to become desegregated! […]

Tullock Email: Crisis Regarding School Board – Request for Your Attention and Help

NOTICE OF FORECLOSURE SALE     STATE OF TENNESSEE, KNOX COUNTY WHEREAS, Carol Clifton and Tommy L. Clifton executed a Deed of Trust to Mortgage Electronic Registration Systems, Inc. as nominee for SunTrust Mortgage, Inc., Lender and Larry A. Weissman, Trustee(s), which was dated September 25, 2012 and recorded on October 2, 2012 in Instrument […]

Last Tuesday, Lori Boudreaux hosted a campaign kick-off at the Copper Cellar. Lori is running for the Fifth District Board of Education seat being vacated by Karen Carson. She greeted supporters from 5 to 7 pm at the West Knoxville area restaurant.   Boudreaux is an educational professional who has worked as an academic counselor. […]

Susan Horn Kicks off School Board Campaign By Sally Absher sallyabsher@knoxfocus.com Susan Horn hosted a well-attended campaign kick-off last Friday evening at the Milestones Event Center in Farragut.  Over 75 supporters and several elected officials attended the event. Susan and her husband Brad have lived in the 5th District for 14 years. They have two […]

The Great Depression in Tennessee

By Ray Hill   Tennessee, like the rest of the country, was suffering terribly from the effects of the Great Depression.  Despite the general impression the 1920s had been a decade of plenty and prosperity, that was not entirely true in the South. Tennessee was especially hard hit.  Following the crash of the stock market, […]

By Steve Hunley The decision by Superintendent of Schools Jim McIntyre to announce his plans to leave office July 8, 2016, contingent upon being given a year of salary, was not necessarily the selfless act some would have us believe.  The plain fact of the matter is McIntyre was about to lose control of the […]

By Mike Steely steelym@knoxfocus.com It’s fun and free and you get exercise in doing it. There are no green fees, no golf carts needed, no expensive equipment and no competition unless you want it. Plus you can wear anything you like and go anytime you want. No, it’s not golf but disc golf. The popular […]

By Steve Williams On the way back from North Carolina and her final cross country race of the 2015 season, Rebecca Story and her mother and brother stopped by the Boyd Mountain Christmas tree farm in Waynesville and had a tree cut down to take home. “I later baked oatmeal cookies – baking is my […]