By Steve Hunley The biggest issue in the coming City of Knoxville elections is, without a doubt, Recode.  Knoxville’s longest serving mayor, Victor Ashe, has appropriately termed it a massive “rezoning” package and indeed it does affect virtually every property within the city limits.  Nor has the city council kept its promises while at the […]

It has come to my attention, through social and other media, that in last week’s Publisher’s Position I incorrectly identified 2019 city council candidate Amelia Parker as having dropped the “F bomb” while addressing city council about an issue at a council meeting in 2016. After further review, I stand corrected that it was not […]

The Socialist Movement in Knoxville 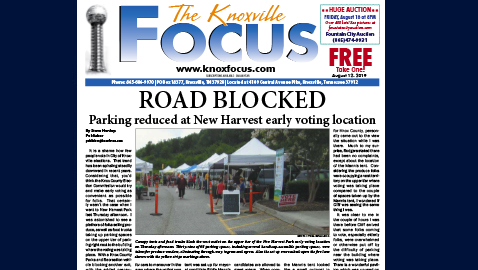 ROAD BLOCKED Parking reduced at New Harvest early voting location By Steve Hunley, Publisher publisher@knoxfocus.com It is a shame how few people vote in City of Knoxville elections.  That trend has been spiraling steadily downward in recent years.  Considering that, you’d think the Knox County Election Commission would try and make early voting as convenient […]

A Chicken In Every Pot or a City Without Hope?

By Steve Hunley I was trying to remember which presidential candidate promised “a chicken in every pot” and checked with our residential historian and my memory was correct, it was Herbert Hoover. Hoover, enjoying the “Republican prosperity” of the 1920s, won a huge victory in 1928. Seven months after he was inaugurated, the stock market […]

By Steve Hunley As the City of Knoxville government considers the “Recode” proposal, I’ve heard that some officials are insisting Recode will not cause taxes to increase.  That just cannot be true.  While Recode has undergone more permutations than Frankenstein’s monster, the supposed purpose of Recode was to increase the “density” of Knoxville, meaning increase […]

By Steve Hunley Recode Knoxville will be voted on Tuesday, July 30 at 6:00 p.m. in the Main Assembly Room of the City-County Building. This will be the second and final vote on the text of Recode which is now at 410 pages in Recode Draft 5.5. Tomorrow’s meeting will also see the first of […]

We found the Recode maps

And Madeline’s Meltdown By Steve Hunley The first of two votes on the zoning and code process upheaval known as Recode in Knoxville City Council has happened. Recode was approved by council by a vote of 7 to 2 (Voting for Recode were: Stair, Saunders, McKenzie, Rider, Roberto, Welch and Wallace. Campen and Singh voted […]

Whatever Happened to Eddie Nelson?

By Steve Hunley, Publisher publisher@knoxfocus.com Edward Nelson was the Democratic candidate last year for the 19th District seat in the Tennessee General Assembly against Representative Dave Wright.  Until quite recently, he was also Vice Chair of the Knox County Democratic Party.  Nominated and lavished with praise by none other than Rene Hoyos, last year’s Democratic […]