‘A storm blowing over a Kansas farm house’ 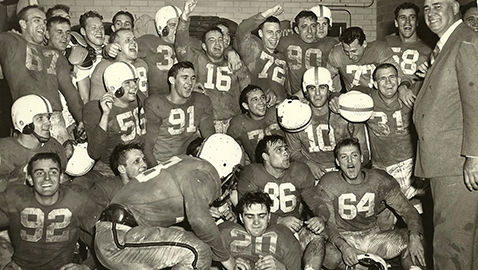 By Tom Mattingly When the Football Writers Association of America selected a Quarter Century All-SEC team for the years 1950-74 in December 1975, the only unanimous selection was Douglas Leon Atkins of Humboldt, Tenn., a legendary Vol from the years 1950 -52. Not LSU’s Billy Cannon. Not Tennessee’s John Majors. Not Alabama’s Lee Roy […]

By Tom Mattingly Before the 1972 season, night games were not part of the Tennessee football experience. There were no lights at Shields-Watkins Field/Neyland Stadium, and the Vols played sparingly under the lights on the road or in bowl games. There were night games at Florida and against Arkansas in the Liberty Bowl in […]

A look at historic scores

By Tom Mattingly There are times the game-by-game scores in the Tennessee Football Media Guide, pp. 280- 296 in the 1919 version, are just a mind-numbing array of numbers, stretching from that first game in 1891, Sewanee 24, Tennessee 0, through the more recent years. No one has had the patience to count how many […]

A continuous hub of activity

By Tom Mattingly A great many interesting things go on in the visiting team’s locker room area after the game is over. Tennessee fans see visiting teams trot onto the field to a scattered chorus of boos, but that’s just part of the story. There’s drama underneath the south end zone few people get to […]

Leading the Vols to the Promised Land of winning football

By Tom Mattingly When push comes to shove for quarterbacks battling for playing time, as is the case this spring and more than likely going into the fall, there are a number of cliches that seem applicable. “The No. 2 quarterback is always the most popular guy in town.” “If you have two quarterbacks, you […] 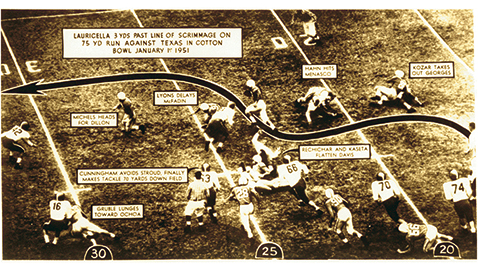 By Tom Mattingly What is the greatest run in Tennessee football history? Opinions vary. If Hank Lauricella’ s 75-yard run in the first quarter of the 1951 Cotton Bowl game against Texas is No. 1, Johnny Butler’s run against Alabama in 1939 is 1a, and Jay Graham’s touchdown runs against Alabama in 1995 and 1996 […]

Not bad for his time

By Tom Mattingly Record-setting performances happen in unexpected places, at unexpected times. It happened in a televised game in the days there were precious few games on the tube. On Nov. 9, in the ninth game of the 1966 season, Tennessee was unranked in AP’s Top 10. The Vols and Kentucky were squaring off at […]