Fifty years later, Sept. 3 again will be a special day for CHS

By Steve Williams Frank “Boomer” Boring took a peek into the future 50 years ago and what he foresaw is scheduled to come to fruition this Friday night. Boring was entering his 16th season as head coach of Central High’s football team when the Bobcats moved into their “new” high school in 1971. The Monday […]

By Steve Williams I asked Farragut High softball coach Nick Green a couple of weeks ago to comment on how much of an inspiration Avery Flatford had been to him and his team. For those of you who don’t know about Avery, she is the Lady Admirals’ junior pitcher who has been playing softball with […]

A Sneak Peek of the 2021 high school football season

By Steve Williams The Spring Fling has come and gone … Football, anyone? Well, after today (June 7), it’s only 72 days to the opening kickoff for the 2021 high school season. Yep, just 11 Friday nights away from those Week 1 games. Opening night, however, won’t be on a Friday. It’ll be on Thursday, […]

What the World Needs Now …

By Steve Williams Dear Santa, As I began writing you, I was asking myself, what does the world need now? What instantly came to mind was that great song from 1965. “What the World Needs Now is Love”… So I immediately googled it and listened to it. I noticed too the playing time of the […]

By Steve Williams Is it right for the fans and local media to be so critical of Coach Jeremy Pruitt this soon in his time at Tennessee? I don’t think so, and it may cause more harm than good. The negativity has raised its ugly head so quickly, in my opinion, because of the UT […]

It could be an unforgettable season in more ways than one

By Steve Williams Governor Bill Lee gave Tennessee high school football the “green light” to start practice on July 31. A season that once seemed like it would never begin because of the coronavirus pandemic ended regular season play for Division I teams three months later on Oct. 30. But it wasn’t without interruption or […]

John Majors ‘upset’ his dad to kick off a long rivalry

By Steve Williams I was looking online for more information on Huntland High School, where Johnny Majors was the state scoring leader for three straight years in earning a UT football scholarship, when I came across an interesting sports column by Charles Rogers that ran in The Moore County News in 2019. The title […] 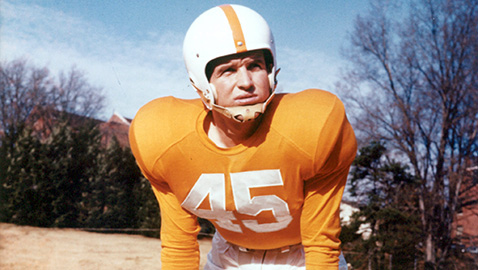 By Steve Williams A friend of mine, the late Aaron Keen, was founder of Rocky Top Views, a UT sports publication, in the early 1990s and needed a delivery person for the East Tennessee area. I took that part-time job to supplement my teacher aide position in ISS at West High and my sports officiating. […]

Did we get it right? By Steve Williams “I think the media are blowing this way out of proportion and are frightening a lot of people unnecessarily.” Those were the words of Dr. Jerry Punch, longtime ESPN sports broadcaster who now makes his home in this area and is a regular guest on The Sports […]

By Steve Williams   In a way, Tennessee’s post-season basketball season has already begun. The March Madness for the Vols started after back-to-back road losses at Auburn and Arkansas in February. At that point, getting invited to the Big Dance seemed out of the question and even a trip to the NIT loomed doubtful. […]