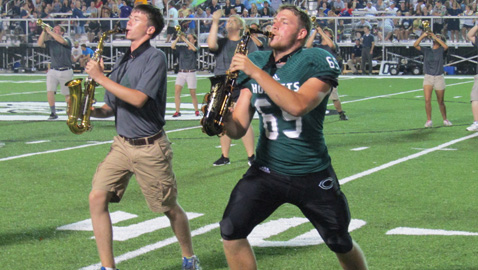 By Steve Williams Will McMahan stands out at Carter High football games, particularly at halftime. He’s the guy playing a saxophone and marching in the school band in his football uniform, a rare sight indeed. Before and after the 20-minute intermission, McMahan, a 6-4, 235-pound senior, is the Hornets’ offensive right tackle. He “loves” band […]

Alabama in a runaway or will SEC media get it wrong again?

The SEC Media Days are in the rearview mirror, but Alabama’s stature in the conference is so enormous, we can still see Big Al, the school’s mascot elephant, and hear “Roll Tide” from miles and miles away. Based on the votes of the media in its prediction of how the 2017 football campaign will end, […]

By Steve Williams It’s time to take a look at John Currie’s first 100 days as the University of Tennessee’s new athletics director. I like him … so far. And I was pulling for Phillip Fulmer and/or David Blackburn to get the gig. Kudos to UT-Knoxville Chancellor Beverly Davenport on her selection, even if Currie […]

By Steve Williams As we celebrate America’s birthday this week, I would like to share some famous sports events that occurred on July 4th over the years. Although it happened before most of us were alive, many sports fans have heard and seen the replay of Lou Gehrig’s famous farewell speech at Yankee Stadium in […]

UT and Bama should play, but not count in division standings

By Steve Williams Discussion of Tennessee ending its traditional football series against Alabama continues to pop up from time to time and as long as the Vols keep losing to the Crimson Tide, we’ll hear about it more often. I understand the unfairness in the sentiments of those who think the Alabama game should be […]

TSSAA director compliments Powell and others for cooperation

By Steve Williams The day after the rains came at this year’s Spring Fling, causing repeated delays in softball and baseball games and forcing tennis play to move indoors, TSSAA Executive Director Bernard Childress said he was particularly sorry for the Powell High softball team. “Both Powell and Brentwood, because of the weather, had been […]

By Steve Williams Bearden High senior Jacob Sobota would have been the favorite to win the TSSAA Class AAA decathlon this week, but he won’t get to compete for the prestigious title because of a late-season injury. “I scratched Jacob from the decathlon,” Bearden Coach Patty Thewes said via e-mail Friday. “He was unable to […]

UT coaches on alert after Currie’s surprising ‘serve’ in tennis

By Steve Williams When John Currie was introduced as UT’s new athletics director, you may remember him saying he wanted to take his time and get acquainted with athletes, coaches and everyone connected with the Tennessee program before he made any major decisions. And there was one comment he repeated often as he was interviewed […]

Tennessee’s No. 2 quarterback would be smart to ‘stay’ ready

By Steve Williams A lot of folks – fans and media types – have been directing their attention to the quarterback battle at Tennessee and who the starter might be for the 2017 football season. It’s indeed the most high-profile position on the team, but let’s not forget that whoever ends up being the backup […] 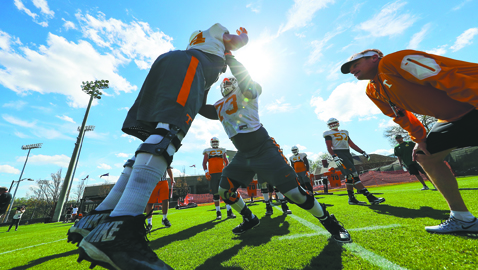 By Steve Williams When you’re 6-foot-6 and 313 pounds, it’s kind of hard to blend in. But in a way, that’s what Trey Smith did best at University School of Jackson last season, and that’s what he’s been doing as he begins what could be a very promising career as an offensive lineman in the […]