UT needs solid linemen and not a coach like Freeze

By Steve Williams One recent coaching hire that really surprised me was Liberty University, the largest Christian college in the nation, hiring Hugh Freeze. How did this guy get a job there? I guess the Flames care more about football and scoring touchdowns than they do about character and living right. I should also mention […]

By Steve Williams Halls High’s football team won the state championship in 1986, but it’s still hard to believe the Red Devils survived their first round game and advanced. Saying Coach Larry Kerr’s team got a scare on that Nov. 7 night 32 years ago in Halls is putting it mildly. The Red Devils were […]

By Steve Williams Knoxville has had its share of special TSSAA playoff games and moments over the years, and not all of them have to do with winning a championship or coming up just a point short. When the classification system was adopted in 1969 and the first three state title games (Class AAA, […]

By Steve Williams The Tennessee Secondary School Athletic Association has crowned 255 state champions in football since 1969. Twenty-five of those have been high school teams in Knox County. On average, that would be about one state champion every two years for the Knoxville area. Winning a state championship is pretty rare. Knoxville and […]

Editor’s Note: When the Tennessee Secondary School Athletic Association started its football classification system in the fall of 1969, The Knoxville Focus’ Steve Williams was a senior at Clinton High School and covering the Clinton Dragons for his hometown newspaper, The Clinton Courier-News. This is his first of a series of columns on the first […]

He knows the score PHOTO BY DANNY DUNLAP Wade Mitchell has operated the game clock and scoreboard at Webb School football games for 36 years. 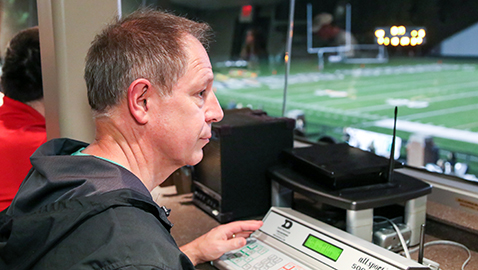 By Steve Williams High school football teams usually have only five home games during the regular season each year, so it is a special occasion each time one is on the schedule. A lot of folks behind the scenes help make it happen, too! You got to have a chain crew on the sidelines […]

This 26-point loss provides hope instead of despair

By Steve Williams Tennessee’s football team didn’t get a win at Georgia, but it gave its fans hope. My how this 26-point loss felt so much better than the 26-point loss to Florida the week before. It inspired me to look at the remainder of the season in a different light. What if I told […]

The fallout from Vols’ awful loss to Florida

By Steve Williams This was the game that would give us a clue on how the 2018 football season might go for Tennessee. The 2-1 Vols had showed promise in a first half comeback against a good West Virginia team in the opener. They started slowly against ETSU but ended up winning big. Their […]

Pruitt may turn Florida series back around

By Steve Williams Well, it’s Florida Week. Sorry if that doesn’t come across with the same passion as I have expressed in the past. There are reasons for that. First and foremost, one Tennessee win over the Gators since 2004 can alter the hopes of even die-hard fans. But I haven’t thrown in the towel. […]

Pruitt needs time, but not my time machine

By Steve Williams I was one of the callers on the Vol Network’s statewide kickoff show prior to Tennessee’s football season opener against West Virginia on Sept. 1. I had been listening to Bob Kesling, Tim Priest and Pat Ryan talk about some of the things new UT head coach Jeremy Pruitt was bringing back […]