By design on April 15, 2018Comments Off on Mr. Speaker: Joseph W. Byrns of Tennessee 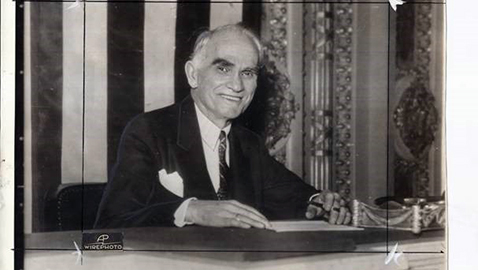 By Ray Hill
Clearly, one of the most important and powerful positions in the American system of government is Speaker of the U. S. House of Representatives.  The last Tennessean to occupy this vital post was Joseph W. Byrns.

Joseph Wellington Byrns was born July 20, 1869 in Cedar Hill, Tennessee.  Byrns graduated from Vanderbilt University, where he emerged with a law degree.  The lure of politics came early for “Jo” Byrns as he was elected to the Tennessee House of Representatives in 1894 when only twenty-five years old.  Young Jo Byrns was reelected to the Tennessee House from Davidson County in 1896 and 1898, eventually becoming Speaker of the House.  Byrns moved up to the Tennessee State Senate in 1900, but decided to run for District Attorney for Nashville in 1902 and suffered the only electoral defeat of his long career.

Byrns recovered from that defeat when he challenged incumbent Congressman John W. Gaines in 1908.  Gaines had been in Congress since 1897 and failed to take the Byrns candidacy seriously.  It proved to be a serious mistake and Jo Byrns was nominated and elected to Congress where he remained for the rest of his life.

Jo Byrns concentrated upon performing the numerous services required of a Member of Congress, doing small favors for constituents while gaining seniority as he was routinely reelected.  Congressman Byrns served during the administration of President Woodrow Wilson from 1913-21, but the decade of the twenties belonged to the Republican Party.  The GOP elected three presidents during the twenties and for the most part, the GOP also dominated the Congress.  Byrns was selected to be the Chairman of the Democratic Congressional Campaign Committee in 1928, but it was a bad year for Democrats nationally and even in Tennessee.

Occasionally Byrns would face opposition inside the Democratic primary after winning election to Congress in 1908, but he led a charmed political life, as he never really encountered a serious opponent.  Congressman Byrns was easily reelected every two years.

Governor Henry Horton and Senator Kenneth D. McKellar were both reelected, but Herbert Hoover carried the Volunteer State over Democratic presidential nominee Alfred E. Smith.  Much of the Democratic political apparatus worked hard for Smith, who was governor of New York, including Senator McKellar and E. H. Crump, leader of the Shelby County political machine.  Smith’s Catholicism and opposition to prohibition proved too much for heavily Protestant and dry Tennessee.

Congressman Byrns thought of leaving the House in 1930 when a Senate seat opened up in Tennessee.  Senator Lawrence D. Tyson had died in August of 1929.  Governor Henry Horton actually appointed former Senator Luke Lea to the vacancy, but Lea turned down the appointment.  Instead, Governor Horton named wealthy candy manufacturer William E. Brock of Chattanooga to serve out the remainder of Tyson’s term.

Congressman Cordell Hull from Tennessee’s Fourth District, immediately announced his own candidacy for the United States Senate well in advance of the 1930 election.  While Hull was quite respected, not everybody in Tennessee was thrilled with the idea of his being elected to the Senate.  E. H. Crump and several others quietly encouraged Congressman Jo Byrns to compete against Hull in the coming primary.  Byrns finally decided to make the Senate race and announced his candidacy, although it would be short-lived.

While making a speech at his Senate campaign kick-off in 1930, Byrns suffered a mild heart attack.  Congressman Byrns quickly concluded his health would not permit him to wage the kind of vigorous campaign necessary to run against Cordell Hull for the Senate and he withdrew, choosing instead to run for reelection to the House of Representatives.  Hull went on to defeat a minor opponent and briefly serve in the United States Senate.

The fortunes of Democrats improved in 1931 when, with the sudden death of several Republican Congressmen, they gained a majority in the House of Representatives.  Once the Democrats attained a majority in the House, Jo Byrns became Chairman of the House Appropriations Committee, a position of considerable power at the time.  By 1933, Byrns moved up the ladder yet again, being elected Majority Leader, a post just under the Speaker of the House.  John Nance Garner of Texas, Speaker from 1931 – 33, had reluctantly accepted second place to Democratic presidential nominee Franklin D. Roosevelt.  The Roosevelt – Garner ticket had easily defeated Republican incumbents Herbert Hoover and Charles Curtis to win the general election.  Garner was succeeded as Speaker by Henry Rainey of Illinois.

Passage of much of the New Deal legislation proposed by President Roosevelt was moved along by Congressman Joseph W. Byrns in his capacity as Majority Leader.  Although more conservative in his personal philosophy, Jo Byrns was a loyal Democrat and he personally sponsored the bill to create one of the more successful “alphabet agencies” of the New Deal, the Civilian Conservation Corps.

Ill health had affected Byrns’s career negatively, but it was the ill health of Speaker Henry Rainey that helped to move Byrns into the Speaker’s chair.  Rainey, seventy-three years old, died from a heart attack on August 19, 1934 while the Congress was not in session.

Congressional Democrats convened to elect a new Speaker and their choice was Joseph W. Byrns of Tennessee.  Taking office on January 3, 1935, Byrns surprised many by his shrewd use of the Speaker’s considerable powers.  Congressional Republicans attested to Byrns’s effectiveness, pointing out much of President Roosevelt’s legislation was carefully piloted through the House by the Speaker.

Tennessee was in the unusual position of having several of its representatives hold vital positions during the early years of Franklin Roosevelt’s New Deal.  Joseph W. Byrns was Speaker of the House; Cordell Hull was Secretary of State and Senator Kenneth D. McKellar was the ranking member of the Senate Appropriations Committee and one of the most influential members of the United States Senate.

Unfortunately, Jo Bryns’s tenure as Speaker of the House was all too brief.  Although he seemed to be vigorous, Speaker Byrns was in declining health.  Byrns suffered a serious heart attack at his Washington home on the evening of June 4, 1936.  The Speaker died before he could be taken to a hospital and he was buried in Nashville.

President Roosevelt eulogized Jo Byrns, saying, “Speaker Byrns belonged to that school of statesman which is the hope and justification of our democracy.”

FDR went on to say that Speaker Byrns had “a simplicity and rugged honesty which we have come to associate with the name of Jackson.”

Atkinson was loathed by Senator McKellar and was a controversial figure and he lost the Democratic primary to Jo Byrns, Jr.  The younger Byrns quickly proved he did not possess the considerable political skills of his late father.

Largely raised in Washington, Joseph W. Byrnes, Jr. seemed to have a disdain for the people he represented and worse still, he did not seem to be able to mask that disdain.  Intemperate in his remarks, Byrns, Jr. made the fatal mistake of referring to his constituents in detrimental terms such as “clodhoppers”.  While Byrns, Jr. survived a rematch with former Congressman Dick Atkinson in the 1940 primary, he was challenged by Percy priest, a reporter for the Nashville Tennessean, who ran in the general election as an Independent.  Byrns apparently expected to win easily, as his district was overwhelmingly Democratic.  Byrns attempted to ride on the coattails of Senator K. D. McKellar and Governor Prentice Cooper, who were also running that year and while there were banners all across the district urging voters to reelect McKellar, Cooper and Byrns, the young Congressman’s personality proved to be too much to overcome.  In a stunning defeat, Joseph W. Byrns, Jr. lost to Independent Percy Priest who remained in Congress until his own death in 1957.  Congressman Byrns could only manage 43% of the vote in his reelection bid.

The younger Byrns left Congress and practiced law and to his credit, served in World War II.  Despite being almost forty years old, Joseph Byrns, Jr. joined the U. S. Army and fought in Europe until the end of the war.

Following his military service, Joseph Byrns, Jr. moved to Florida where he lived out the rest of his life.  Evidently Byrns lived in semi-retirement following the war and he died in Florida at age sixty-nine.  His remains were returned to Nashville where he was buried near his parents in Mount Olivet Cemetery.