By design on February 26, 2017Comments Off on Senator McKellar: Politics and Death 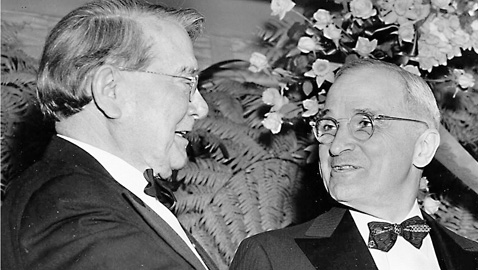 When author Mark Twain was informed a newspaper had printed his obituary, he tartly replied, “The reports of my death are greatly exaggerated.”  Tennessee’s Senator Kenneth D. McKellar was seventy-seven years old in 1946 when he sought reelection for a sixth term.  McKellar had been ailing, although he seemed busier than ever, quite a feat for a man who had always possessed extraordinary nervous energy.  Tennessee was then a one-party state and the Republicans represented no real threat to McKellar’s continued tenure in the United States Senate.  Senator McKellar was facing his first serious opponent in a Democratic primary since 1928.  Edward Ward “Ned” Carmack was the son of U. S. senator Edward W. Carmack, who had been murdered in a shootout on the streets of Nashville in 1908.  There were those in Tennessee who still remembered the elder Carmack.  Unfortunately, the younger Carmack was not even a pale imitation of his famous father.  Ned Carmack had reaped failure from just about every enterprise and endeavor he had attempted as an adult.  Still, Carmack had quite nearly toppled Tennessee’s junior U. S. senator, Tom Stewart, in the 1942 primary.  After Chattanooga Congressman Estes Kefauver had decided McKellar was too formidable to challenge, Carmack entered the senatorial primary as the champion of those Democrats who chafed under the rule of the McKellar – Crump combine.

Senator McKellar had arrived in Nashville during January of 1946 to be greeted by a host of Tennessee’s political and business elite as he prepared to return to Washington, D. C.  McKellar’s prominence in government was highlighted by the fact he was the Acting Vice President of the United States after Harry Truman ascended to the presidency following the death of Franklin D. Roosevelt.  McKellar was President Pro Tempore of the U. S. Senate and Chairman of the Senate’s Appropriations Committee, giving him enormous power of the federal budget.  For decades McKellar had diligently attended to his duties and the people of Tennessee.  There was hardly a family in Tennessee for whom the old senator had not done a personal favor.  After holding court in Nashville, McKellar climbed into the sleek black vice presidential limousine and returned to the nation’s Capitol.  The senator would not return home to Tennessee until after the primary election.  McKellar never once came home to campaign against an active opponent who had quite nearly beaten his colleague four years earlier.

At seventy-seven, K. D. McKellar was obviously aging and the Tennessean had endured several health scares in recent years, all of which had been well publicized.  Carmack also had the advantage of having the all-out support of Silliman Evans, publisher of the Nashville Tennessean, who hoped to topple McKellar from the Senate and replace the senator and E. H. Crump as the real power in Tennessee politics.  Evans saw to it that Carmack’s campaign received maximum coverage, which helped the challenger’s campaign, especially in Middle Tennessee where the Tennessean was widely distributed.

Tennesseans were reminded of K. D. McKellar’s age yet again when he was taken to Bethesda Naval Hospital the first week of May for “an unannounced ailment.”  The senator was especially touchy on the subject of his age and his staff was equally reticent to discuss any illness publicly.  Any trip to the hospital was usually attributed to overwork or a heavy cold.  In this instance, the Naval Hospital released a statement Senator McKellar was a patient for a mere checkup and nothing more.  The statement indicated the senator was “not seriously ill and probably will be here for a few days.”

Whatever ailment was plaguing the senator, he was up and around in short order, accompanying Senate Majority Leader Alben Barkley to the White House later that month.

Ned Carmack used the occasion of McKellar’s visit to Bethesda Naval Hospital to delay the opening speech of his drive for the Democratic senatorial nomination.  “I am informed from Washington that Senator McKellar is still partially incapacitated from his recent illness,” Carmack said.  “In view of this I have decided to withhold the opening of this campaign.”  McKellar snorted he did not believe for a moment Carmack was delaying his campaign opener for any reason other than “he has not been able to complete his own ticket.”  The senator snapped, “I don’t want Carmack to delay on my account.”

The McKellar campaign made several announcements about the senator’s impending return to Tennessee and there were hints about a statewide tour.  Senator McKellar was quoted as saying he would campaign from one end of Tennessee to the other, but eventually the announcements were dribbled out and then petered out entirely.  By June the temperatures were rising in Tennessee and it was soon terrifically hot.  McKellar had never much liked the oppressive heat and his managers worried about the old senator wilting in the humidity.  McKellar supporters argued that he was needed in Washington and ought to be commended for his attention to his duties, but there were persistent rumors in Tennessee that the senator was seriously ill.  The rumors grew darker with McKellar’s absence from the campaign trail and there were whispers the old senator was dead.  E. H. Crump bought enormous ads in most of the Tennessee daily newspapers poking fun at the rumors, bringing them out into the open.  Assuring voters McKellar would beat Ned Carmack easily, the Memphis Boss warned voters they could hear literally anything before Election Day.  Crump said Tennesseans should be prepared for the wildest rumors to fly before all the ballots were counted and gave examples.  “Senator McKellar dropped dead in Toronto, Canada” was one of many voters might expect to hear.  The Memphis Boss thought it just as likely Tennesseans might hear, “Senator McKellar’s wife, a beautiful, bewitching young blonde, weighing 197 ½ pounds, busted him in the head with a hot skillet and he died in a Nashville hotel.”  McKellar was well known for being a bachelor, although E. H. Crump scoffed folks would be told, “Senator McKellar is 115 years old and is very sick, not expected to live, in a hospital in San Francisco.”  Crump said “’Silly-man’ Evans, ‘Coo-Coo’ Carmack and their fellow conspirator Drew Pearson” were all conspiring to defeat McKellar.  Pearson, a muckraking columnist who never let an actual fact stand in the way of a good story, had tortured the Tennessee senator in print for years and managed to once aggravate the famous McKellar so badly that the Tennessean gave a bravura performance on the Senate floor to denounce the columnist.  Crump told voters not to be fooled; Senator McKellar and his ticket mates were “running faster than the latest designed rocket ship.”

For those who were enjoying the fireworks, it became readily apparent K. D. McKellar was not incapacitated, much less dead.  An item in a recent Drew Pearson column stating that the Tennessee senator, “fighting a desperate battle for reelection”, had sought an open endorsement from President Harry Truman, raised McKellar’s wrath to the boiling point.  Once again, McKellar took to the Senate floor to deny the charge.  “The statement that I have directly or indirectly, openly or covertly, or in any other way, asked President Truman for a statement of any kind about my candidacy is damnably false,” McKellar bellowed.  Pearson claimed Crump had said McKellar would be defeated without some kind of endorsement from Truman, a charge that was almost certainly a lie.  McKellar scoffed at the notion the Memphis Boss had said such a thing, a charge Crump hotly denied.  McKellar flatly referred to Silliman Evans and Pearson as “liars.”  Evans affected a lordly disdain, saying while he realized McKellar’s statements made on the Senate floor protected him from libel, he would “waive any libel in the matter” and published it in his own newspaper.  What Evans knew was most every other newspaper in the country would carry the story as well.

A Truman endorsement was forgotten when the Tennessee Society gave a sumptuous banquet honoring McKellar at Washington’s elegant Mayflower Hotel.  Much of official Washington was in attendance and the President made a surprise appearance.  Few newspapers in Tennessee failed to run photographs of Senator McKellar shaking hands with President Harry Truman at the gala.

Nor  was the McKellar campaign idle.  The Tennessean fumed a speech made by McKellar in June demolishing the charges made by Ned Carmack that he wished to subjugate the Tennessee Valley Authority for patronage were being mailed under the senator’s Congressional frank by the tens of thousands.  The Tennessean never bothered to explain just how it was possible for a deathly ill old man to make a long speech on the floor of the Senate.  Nor was some of the negative press McKellar received as hurtful as intended.  Rufus Terral, a writer for the St. Louis Dispatch noted, Senator McKellar was “without question the most powerful man in Congress.”  Tennesseans were less interested in the perks accruing to McKellar’s seniority than the fact he was in an excellent position to help Tennessee and them, if they should need it.  Terral recorded he had arrived at McKellar’s ceremonial office, which he occupied as President Pro Tempore of the United States Senate, that the senator was surrounded by “almost life-sized paintings of American statesmen…” and sat at a desk beneath “a massive chandelier.”  Terral told McKellar he had brought along a cartoonist who would sketch the senator with his consent.  McKellar replied, “I’m as ugly as home-made sin, but that ain’t my fault.”  What out-of-state journalists perceived as faults, many Tennesseans prized as virtues in their senior senator.

Senator McKellar never did return to Tennessee to participate in the senatorial campaign.  The senator’s reelection campaign was carried on in absentia with surrogates taking up the speech making duties.  McKellar was placed in the unenviable position of leaving Washington to campaign while Congress was still in session and considering important legislation.  Had he returned to Tennessee to campaign, he would have doubtless been criticized for leaving his post to seek votes; by remaining in Washington, he was attacked for not coming home.

McKellar was also targeted for defeat by the CIO PAC; the senator had earned its enmity when he had forthrightly refused to answer a questionnaire put to him.  Senator McKellar wrote back his platform was already written and he would adhere to it and would not be moved by the CIO’s demands.  Strongly supported by the AFL and most of organized labor, McKellar bluntly told the CIO representatives he didn’t care whether they supported or opposed him.

On Election Day, none of it mattered.  McKellar swept ordinarily Republican East Tennessee, although he remained highly popular in the region.  McKellar did not fare as well in Middle Tennessee, which was also the area where the readership of the Nashville Tennessean was the largest.  Senator McKellar won West Tennessee overwhelmingly and his total in the primary amounted to almost 62% of the vote.  Carmack, who had quite nearly beaten Tom Stewart in 1942, won just over 35% of the vote.  The 1946 election ended Ned Carmack’s flirtation with politics and stunned many of the out-of-state prognosticators who felt certain McKellar was in danger of losing his reelection campaign.

Rumors of the old senator’s illness, impending death and actual death before Election Day did little to impede Kenneth McKellar’s bid for a sixth term.

Senator McKellar: Politics and Death added by design on February 26, 2017
View all posts by design →