By design on December 28, 2020Comments Off on Surprises await at David Crockett Birthplace State Park 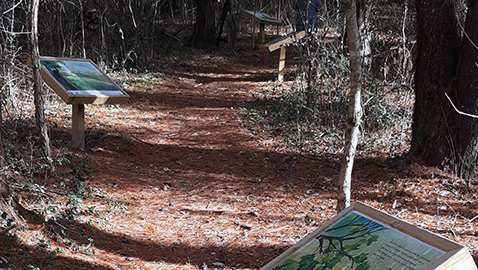 Sometimes when you visit a place you’ve been before you can still find some real surprises.

When my wife and I decided to take a day away from our home in Knoxville and make a safe drive to David Crockett Birthplace State Park, just east of Greeneville, we knew the place must have changed somewhat since our last visit several years ago.

What we didn’t expect, aside from the huge amount of traffic during the pandemic, was how much the place had changed. There’s RV camping there now, several new log buildings, a third re-building of a cabin where it is believed Crockett was born, a visitor center and a small museum.

Near the parking lot at the park entrance was another surprise. A small path led up and around a wooded hill there and every few feet stood a display sign.

The signs tell a story and bits of folktales and history and point out the native plants along the trail.

The park is about two hours from Knoxville by way of I-81 or Highway 11E. You can totally bypass the interstate if you wish by taking Andrew Johnson Highway through Jefferson City, Morristown, Bulls Gap and Greeneville. We were amazed at the growth of Greeneville with every imaginable national chain store and lots of local businesses as well visible from the bypass.

David Crockett Birthplace State Park has 105 acres along the Nolichucky River and is at or near the birthplace Crockett wrote about. No, he wasn’t “Born on a mountain top in Tennessee” as the ballad goes, but on the banks of the river where his father built a cabin. The park has, in season, various planned programs and obviously honors the life of the hero who died at the Alamo in 1836.

Crockett left his family at an early age, lived with the Cherokee, did odd jobs and rejoined them briefly when his father built the “Crockett Tavern” in what is now Morristown. David, or Davy, married and moved to western Tennessee living at several places there. Yes, there’s another David Crockett State Park, that one near Lawrenceburg.

The Birthplace State Park has 48 full RV hookups, 16 water and electric sites, and 13 primitive tent sites. A swimming pool is open during the summer, and there is fishing in the river and five miles of hiking trails. There are picnic tables here and there in the park. If you don’t take a picnic lunch you might want to stop in Greeneville and get chicken or something to go and eat at the park.

In the center of the park is a marble monument to Crockett surrounded by a rock wall that holds stone from all 50 states. In the distance is a barn with donkeys and sheep. You can drive to various sites in the park or, to help stretch your legs from the drive, you can walk to most of the sites with ease.

And don’t pass up the Story Trail.

If you’re headed that way you may also want to stop by Crockett Tavern in Morristown, get off the highway at Bull’s Gap and visit the city hall and ghost town there, or check out the President Andrew Johnson sites in Greeneville.

Taking a day trip is a great and safe family outing. Don’t forget to take your mask or face shield, or both, and use hand sanitizer after you gas up.

We drove the entire trip from our house in north Knoxville to the park without ever touching the interstate. The trip is a bit longer but, even with some traffic, you have a chance to make quick side trips to other sites along the way.

So, get out of the house and take the family somewhere, even if it is a no-destination drive. It helps break up the “cabin fever” and isolation.