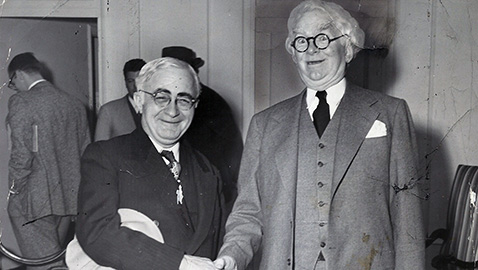 Overton began his political apprenticeship by getting elected to the state legislature where he caught the eye of E. H. Crump. Watkins Overton had served in both the Tennessee House of Representatives and the State Senate before being tapped by Crump to run for mayor of Memphis.

Edward Hull Crump, a former mayor himself, had painstakingly built a highly functioning political machine that permeated every layer of society in the Bluff City and the outlying area of Shelby County. Crump had yet to fully consolidate his political power and thought Overton would be the strongest candidate to oust the incumbent mayor, independent Rowlett Paine. Overton won the election and within a year of taking office, Watkins Overton faced one of the most difficult crises ever to pummel Memphis: the Great Depression. Overton demonstrated very real administrative ability during the Depression, albeit his task was made easier by the election of Franklin D. Roosevelt as president and the beginning of the New Deal. Tennessee’s senior United States senator, Kenneth McKellar, was the ranking member of the Senate’s powerful Appropriations Committee, through which every federal dollar spent by the government passed, and McKellar’s home city was Memphis. McKellar was in an ideal position to direct federal money to both Memphis and Tennessee and the senator was always in a generous frame of mind when it came to his home folks. Memphis had been $900,000 in debt when Overton had originally been elected mayor and by the time he left office, the city had a $1 million surplus.

Mayor Overton’s relationship with the Memphis Boss could best be described as stormy. Proud and able, Overton frequently resented being depicted as a mere puppet for Crump. Still, Overton allowed himself to be used by the Memphis Boss when Crump was at odds with his political partner, Senator K. D. McKellar. Crump attempted to threaten McKellar’s standing as a delegate at-large to the Democratic National Convention by using the mayor as a prospective candidate. Overton’s candidacy melted like a snowball in Hell and just about as quickly when it became readily apparent just how strong McKellar was all across the state. Crump at once realized it was a fight he could not win, a key factor in his decision to make amends with McKellar.

Watkins Overton served throughout the entire Great Depression as the mayor of Memphis and had been in office twelve years when he finally openly broke with Crump. At the heart of the issue was a disagreement between the two men over the purchase by the city government of the Memphis Power and Light Company. Crump had praised Overton’s work, saying the Memphis Power and Light Company should “snap” up the city’s offer “like hotcakes.” Yet Crump added the City of Memphis should buy the Power and Light Companies’ gas properties as “Gas rates here are entirely too high”, a sentiment likely shared by many Memphis residents. After dickering back and forth between the city and the Memphis Power and Light Company, an agreement was reached. Mayor Watkins Overton was duly praised by just about everyone when E. H. Crump issued a statement about an innocuous grocery store ordinance that had been unanimously passed by the City Commission earlier. Commissioner Joe Boyle, a loud, oftentimes crude and largely talentless man who served as Crump’s mouthpiece on the Commission, lamented having supported the initial ordinance and Mayor Overton was astonished when the Commissioners repealed it. The Memphis Boss had described the ordinance as “impractical” and “unsound”, complaining it harmed small grocers. When asked if the grocery ordinance represented a break between them, Crump referred reporters to Mayor Overton. Watkins Overton referred the same reporters back to the Memphis Boss. Crump clearly commanded the loyalty of a majority of the City Commissioners and Mayor Overton knew it. The crux of the break was E. H. Crump disliked the idea of Mayor Overton having taken over the negotiations with the Memphis Light and Power Company. Crump had been a strong advocate of public power throughout his career and a fervent backer of the Tennessee Valley Authority. Eventually, the City Commission renegotiated the sale of the electric and gas properties owned by the Memphis Light and Power Company to the satisfaction of the Memphis Boss. It was a public humiliation of Mayor Watkins Overton and a reminder of precisely who ran Memphis and Shelby County. In August of 1939, Overton announced he was having an examination of the city’s voter rolls done at his own expense. The mayor must not have liked what the examination revealed for he announced he would not run for reelection that fall. As E. H. Crump prepared to board a train to take him to his annual respite in Battle Creek, Michigan, reporters wondered who would be the next mayor of Memphis. The Memphis Boss snapped, “Why do you ask me?”

When Crump made some intemperate remarks about Overton that fall, the Mayor’s bitterness spewed up as he gave out an emotional statement that said the Memphis Boss’ “path to eternity is strewn with the wreckage of men who have dared to stand up for what they believe to be right.” Overton detailed his impressive work on behalf of the people of Memphis and the accomplishments of his administration, which were considerable. Overton noted Crump would defame any “freeborn American who dared differ with him or stand up for what is right or just.” Mayor Overton closed his statement with the somewhat overwrought comment, “I will never bow my knee to any tyrant. I will never raise my hand in the Nazi salute to any dictator. I still believe in Democracy.”

It was Crump who ran for mayor that year, although it was a bizarre process. Crump claimed he was an “elector” for Congressman Walter Chandler, who was still needed in Washington to support much of President Roosevelt’s lend-lease legislation. By voting for Crump, Memphians were in reality marking their ballots for Walter Chandler. Naturally, Crump won the election easily and Chandler was voted in as mayor by the City Commissioners after Crump majestically resigned his office. Watkins Overton resumed a private law practice and for some years remained in the political wilderness.

It was E.H. Crump who extended the olive branch to Watkins Overton when the Memphis Boss wondered if the former mayor might not enjoy being president of the Memphis Board of Education. Overton replied he would enjoy the work and the former mayor tackled the problem of local education with his usual zest. There was good reason to believe E. H. Crump actually regretted his earlier break with Watkins Overton. The Memphis Boss readily admitted Overton had been an excellent mayor and had administered local government quite well. It was Overton who had delivered perhaps the most severe denunciation of Crump in the Memphis Boss’ public career; yet Crump never replied to the former mayor’s verbal barrage. Nor did Crump ever mention it in the years to come. For one who was commonly depicted as utterly unforgiving, E. H. Crump’s relationship with Watkins Overton defied description.

Mayor Walter Chandler had hoped to cap his political career by winning election to the United States Senate in 1946. That presumed seventy-seven year old K. D. McKellar could be beaten or convinced to retire. Senator McKellar showed no indication of slowing down or retiring. Chandler evidently hoped E. H. Crump would either convince McKellar to quit or withdraw the support of the Shelby County machine. Crump had been invited to the White House by Franklin Roosevelt shortly before the President’s death in 1945 for the very same conversation. President Roosevelt had asked the Memphis Boss to pull his support from McKellar and Crump, who did not especially like FDR, flatly refused. Roosevelt, stung, insisted McKellar would lose if he ran again. Crump serenely corrected Roosevelt and told the President, McKellar would not only run again, but win reelection to a sixth term. Crump, who had refused a president of the United States, had no compunction about telling his hand-picked mayor the same thing. Walter Chandler was so disappointed and hurt, he abruptly resigned as mayor. After an interval served by Sylvanus W. Polk, James Pleasants served as mayor and never seemed to recover from an attack he made upon Edward J. Meeman, editor of the Memphis :ress Scimitar. The attack was made at the behest of Crump and inferred Meeman was a homosexual. Later, Pleasants was serving as City Attorney for Memphis when he committed suicide.

The political instability, the post war world, and Watkins Overton’s return to public life made him an especially inviting candidate to run for mayor in 1949. Crump enthusiastically supported Overton’s return to the mayor’s office. Politically, things had changed considerably for E. H. Crump as well. Crump had suffered the first real defeat since 1932 when he refused to support U. S. senator Tom Stewart for reelection in 1948. The Memphis Boss honestly believed his decision to back another candidate would cause Stewart to simply retire from the Senate; Stewart surprised the Memphis Boss when he refused to bow out of the race. Still, Crump’s decision to support an unknown Circuit judge from Cookeville, John A. Mitchell, enabled Chattanooga Congressman Estes Kefauver to win the Democratic nomination. Had Crump supported Senator Stewart, Kefauver almost surely would have lost. Crump was also stung by the election of former governor Gordon Browning, who defeated the incumbent, Jim McCord inside the Democratic primary. Browning had left office ten years earlier as one of the worst defeated governors in Tennessee history to return to Nashville in triumph, handily beating McCord. It was Jim Nance McCord who had convinced the state legislature to pass a sales tax to help education. While the sales tax certainly helped fund education in Tennessee, it did not help Jim McCord’s political fortunes. The long political domination of Tennessee politics by Senator K. D. McKellar and E. H. Crump had come to an end with the 1948 election. Crump compounded that mistake by supporting the States’ Rights Democrats in the general election against the Democratic nominee, President Harry Truman. Senator McKellar loyally backed Truman.

Watkins Overton was again E. H. Crump’s choice for mayor in 1949. Restored to the mayor’s office, Overton resumed his duties with a frenzy of activity. Overton served as mayor of Memphis for another four years before there was another political rupture with Crump. The Memphis Boss attempted to avoid another break with Overton and when it came, the mayor resigned once again. Crump died in 1954 and Memphis would once again elect a mayor in 1955. Overton became a candidate, thinking he would benefit from the old Crump supporters, as well as opponents of the machine. It was a serious political miscalculation. Overton lost badly to businessman Edmund Orgill.

After losing his last race for mayor, Watkins Overton again returned to practicing law and managed his various properties and business interests. The former mayor began ailing and was suffering from throat cancer the last several years of his life. Overton suffered a heart attack on Thanksgiving Day in 1958 and was operated on for throat cancer when he was strong enough to endure the surgery. Overton died on December 3, 1958 at the age of sixty-four. Both E. H. Crump and K. D. McKellar were gone and the longest serving mayor of Memphis joined them in Elmwood Cemetery.