By design on April 15, 2012Comments Off on Karns Senior Signs With Johnson and Wales 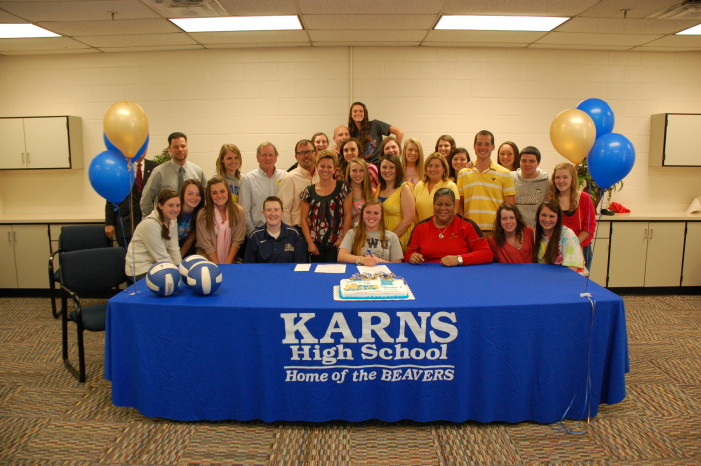 Tia Luneke wanted to play volleyball. That was the goal of her college search. The Karns High School senior has realized that dream of playing volleyball at the next level. She signed Friday afternoon with the Johnson and Wales Wildcats, a small school of 2400 students in Charlotte, North Carolina.

It was a bit of a challenge finding Johnson and Wales. “I wasn’t sure what I wanted to do,” Luneke said. She said her dad stumbled across Johnson and Wales and emailed the coach. It also helped that the assistant coach had seen Luneke play at a volleyball camp at Clemson University.

“I applied first to the college of baking and pastry arts,” Luneke said. When she discovered admittance into the program was full, she said the head of admissions urged her to apply to the culinary arts major. She got accepted into that major on a college scholarship to play volleyball.

Luneke said it is Johnson and Wale’s third year of offering volleyball. She said that as a freshman, she got into some trouble. To give her something to focus on, the volleyball coach, Coach Williams urged her to get into the sport. Her dad said, “Just do it.”

“Volleyball helped me to be a role model,” she said.

Tia said that the best thing about volleyball is that every point is a new point. “We work as a team. Everyone is very supportive.” The most challenging thing she said is trying to fix old habits and improper muscle memory. “But once you accomplish it, it’s the greatest thing in the world. We (the team) are a family and give back to each other.”

Karns lost five seniors from the 2010-2011 state team but surprised some people, Luneke said. She can’t wait to begin her career at Johnson and Wales. “They have the same colors as Karns, but they have a better mascot,” she said.

Karns Senior Signs With Johnson and Wales added by design on April 15, 2012
View all posts by design →