By design on February 9, 2014Comments Off on Knox Countians Approve Haslam Initiative 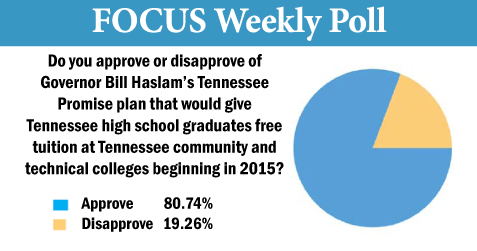 The results were pretty much uniform all across the county and inside the City of Knoxville. Every district reported majorities of more than 75% with the high being in the Fifth District, which is far West Knoxville and the Town of Farragut. More than 86% of respondents in the Fifth District said they support the governor’s plan. The second highest number of respondents favoring Governor Haslam’s plan was in the Sixth District, which is northwest Knox County and includes the Karns and Powell communities. 85% of those polled say they favor the governor’s “Tennessee Promise.” South Knoxvillians like the governor’s plan as well, with slightly more than 84% of respondents approving the “Tennessee Promise.”

Slightly more men than women liked the idea of the “Tennessee Promise” with almost 83% of men favoring it, while only 78.46% of women said they favor it.

Interestingly, the age group most strongly in favor of the “Tennessee Promise” were seniors. Almost 81% of seniors said they support the governor’s plan.