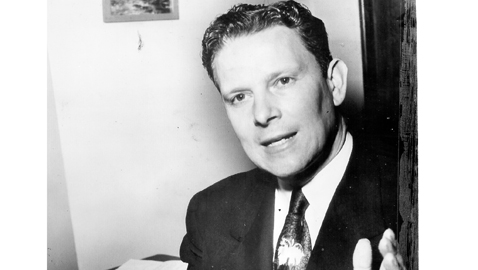 In 1938, Albert Gore defeated a host of opponents to go to Washington as the Fourth District’s Congressman.  Gore had long idolized a former Congressman from the Fourth District, Cordell Hull.  Hull had known Gore’s father quite well and lived in Carthage when in Tennessee.  Gore would frequently visit whenever Hull had finished dictating his mail and wandered down to the courthouse square after lunch.  When Gore first went to Washington, Hull was Secretary of State in the Franklin Roosevelt administration.  Gore had lost none of his admiration and respect for Hull and came to view the stately Tennessean as his mentor.

Despite his admiration for Cordell Hull, Albert Gore quickly displayed a maverick streak that would remain with him throughout his political career.  Gore did not approve of Franklin Roosevelt’s attempt to purge the Democratic Party of those senators who had opposed FDR’s efforts to enlarge the United States Supreme Court.  Gore’s displeasure with Roosevelt’s court packing plan may very well have had a local angle, as the Congressman-Elect was critical of Tennessee’s powerful senior United States Senator Kenneth D. McKellar, as well as E. H. Crump, McKellar’ political partner and the leader of the Shelby County machine.  Gore did not like the fact the Roosevelt administration placed nearly all the Federal patronage in the hands of Senator McKellar.

Gore later recalled when he first ran for Congress he encountered opposition from “the Federal crowd,” which was led by Senator McKellar.

The new Congressman learned a valuable political lesson when he was first invited to visit the White House by President Franklin Roosevelt.  Gore, thinking he would use the opportunity to point out to the president some flaws in pending legislation supported by the administration, found himself the victim of FDR’s legendary charm.  Roosevelt, as usual, dominated the conversation and Congressman Gore found himself seduced by the president’s lecture on the need to help American farmers and workers.

In organizing his Congressional office, Gore put his wife Pauline on the payroll.  Doubtless Mrs. Gore worked hard and was quite efficient and knew the district and it was by no means an uncommon practice in Congress at the time.  Still, Gore never drew the same kind of attention for nepotism that Senator McKellar did.  Years later, Gore’s predecessor in Congress, old J. Ridley Mitchell, denounced Gore for nepotism.  While in Congress, Mitchell had long been a critic of the practice of nepotism.

As a freshman Congressman, Gore made little impression on the House, although he did find himself in a spat with one of the most senior Democrats in the House of Representatives, Congressman Sol Bloom.  Gore had wanted to help a resident of his district get a job as a Capitol police officer.  Congressmen and senators frequently sought such jobs for constituents, especially young men who were ambitious to work while attending one of the prestigious Washington-area law schools.  Bloom was, to put it mildly, not receptive to Gore’s request.  Albert Gore yet again proved to be both industrious and shrewd and chose the perfect moment to bedevil the New York Congressman.

Bloom was very protective of the World Fair, which was in New York City.  The director of the World’s Fair had apparently made the mistake of promising more funding for those European countries participating in the Fair.  Unfortunately, the money would have to be approved by Congress and Gore enlisted the aid of other freshmen members of Congress to lard the funding bill with pork.  Gore’s strategy worked and his constituent was put to work on the Capitol police force.

Albert Gore demonstrated persistence and determination when he felt strongly about a subject and his opposition to a Roosevelt administration housing bill did not sit well with Democratic leaders in the House.  Gore wanted to speak to the bill, but the leaders of his own party refused to give him time.  Undeterred, Gore sought out Joe Martin, the Republican leader in the House of Representatives.  Most Republicans were naturally opposing the housing bill as well and Martin was delighted to give the Tennessee Congressman time to speak on the floor.

By all accounts, Gore’s speech was widely considered to be effective and may have actually changed some minds before the vote was taken, a rarity indeed in Congress.  Gore derided the bill as a boondoggle, which would cost far more than the $800 million requested by the Roosevelt administration.  When he had concluded his talk, many members of the House stood up to give Gore a rousing ovation, a rare tribute to the young Congressman’s speaking ability and reasoning.  The Roosevelt administration lost on a vote of the House, which likely did not endear Albert Gore to President Roosevelt at the time.

As a Member of Congress, Albert Gore concentrated on working hard for his district, tending to the various matters and requests a Congressman receives routinely.  Gore habitually congratulated constituents on the arrival of new babies, as well as sending along his best wishes to newlyweds.  Gore was himself the recipient of such a letter from Senator McKellar on the birth of his son Albert, Jr.

While tending to the home folks, Gore also managed to be involved in a wide variety of issues coming before the Congress.  Gore was a staunch supporter of the reciprocal treaties negotiated by Cordell Hull’s State Department.  Hull was himself somewhat obsessed with tariff issues throughout his time in Washington and Gore also lent his support to the foreign policy of Franklin Roosevelt and Secretary Hull.

Albert Gore moved throughout his district at a frenetic pace, attending all sorts of events and initiated a radio program to inform his constituents about the issues facing the country.  Gore’s efforts paid off politically, as he was unchallenged for reelection in the 1940 Democratic primary, the only contest that mattered in the Fourth Congressional district.  Gore was popular inside his own district, winning renomination by a bigger margin than any other Democratic Congressman in the State of Tennessee that year.  Gore’s 36,000 plus votes in the primary even exceeded the complimentary vote given Congressman Cliff Davis in the Crump domain of Shelby County.

It was an impressive performance, especially considering Tennessee politics was then dominated by Senator K. D. McKellar and Edward Hull Crump of Memphis.  Senator McKellar was reelected that year to a fifth term in the United States Senate and Governor Prentice Cooper was reelected to a second two-year term as Tennessee’s chief executive.

Congressman Gore was soon engaged in defending perhaps the most important New Deal agency in the Volunteer State: the Tennessee Valley Authority.  The 1938 elections had reduced the enormous majority enjoyed by Democrats following Franklin Roosevelt’s landslide reelection in 1936.  A coalition of conservative Democrats and Republicans were a constant threat to additional appropriations for the TVA and Gore, along with most of Tennessee’s Congressional delegation, fought hard to preserve and protect TVA.  While Senator Kenneth McKellar’s feud with TVA Director David Lilienthal has become legendary, Congressman Gore himself later admitted that it was McKellar’s power and influence in the Senate that oftentimes saved the TVA appropriations.  McKellar was frequently referred to as “the rich uncle of TVA” and in interviews following his defeat for the Senate in 1970, Gore generously gave Senator McKellar credit for being successful in providing funding for the Tennessee Valley Authority.

Despite Congressman Gore’s modesty about his success in protecting the TVA, he proved to be a resourceful advocate for the agency.

Albert Gore again proved his political independence when he opposed a price control bill that would give even more power to Leon Henderson, a Roosevelt appointee who exercised considerable control over the home front economics.  Gore disliked the bill intensely and responded by drafting his own legislation.  With the power of the Roosevelt administration, in the midst of a world war, Gore’s proposal had little chance of success, but he persisted nonetheless.  Gore’s own opinion of Henderson was shared by Senator McKellar, who thought too much power had been reposed in a non-elected official.

Albert Gore was in Tennessee when the Japanese bombed Pearl Harbor.  Congressman Gore was scheduled to speak on the radio from Nashville and naturally his topic had changed with the attack on Pearl Harbor.  Gore lambasted the Japanese and told his constituents to prepare for war.  Following his broadcast, Gore hurried back to Washington where he joined his colleagues in listening to a somber Franklin Delano Roosevelt give his famous speech asking the Congress for a declaration of war against the Axis powers.

During the hysteria of World War II, many politicians supported the notion of interning Japanese Americans for the duration of the war.  Tennessee’s junior U. S. Senator Tom Stewart had such a bill, but President Roosevelt issued an Executive Order, which accomplished the internment.  Congressman Gore supported FDR’s decision enthusiastically.