By design on June 3, 2012Comments Off on Poll Shows Political Repercussions 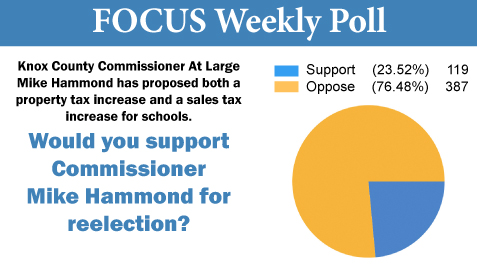 More Than 75% Say They Would Not Vote for Hammond

For those who don’t think there would be political repercussions from the proposed tax increases sought by school Superintendent James McIntyre, the results of this week’s Focus poll indicates otherwise.

The results were a resounding “no.”

Mike Hammond is Chairman of the Knox County Commission and one of two Commissioners-At-Large; the other is Ed Shouse.  Both Commissioners Shouse and Hammond run county-wide.

Recently, Commissioner Hammond crafted a proposal with Board of Education Chairman Thomas Deakins that would increase both the sales and property taxes for schools.  Apparently, the Hammond – Deakins proposal is wildly unpopular throughout Knox County.

The number was even higher in the Sixth District; the Eighth, and Ninth Districts also posted numbers over the county-wide average of 76%.  The total in the Seventh District was just over 76%.

The totals county-wide indicate Hammond would be very vulnerable in a primary contest in two years; it is doubtful he could get to the general election.

The poll is a clear indication of the feeling of the voters, despite a heavy investment by the Chamber of Commerce and the Superintendent’s allies of a $50,000 advertising campaign.  Commercials have been running in heavy rotation on cable channels, as well the evening news broadcasts.  Evidently the advertising campaign has little effect, save to make even more voters aware of the effort to increase taxes.

As more and more voters become engaged, it looks like those Commissioners flirting with the idea of voting for a large tax increase may well be headed for defeat in the next election cycle.