By design on July 29, 2012Comments Off on Powell Panthers Prepare to Open the Derek Rang Era 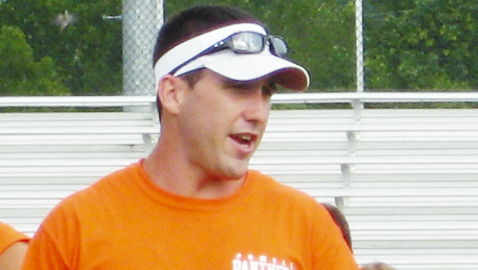 Radio Voice of Powell Panther Football on AM 620 WRJZ

As they came up just 15 yards short of a Class 5A state championship last December 2 in Cookeville, little did most Powell Panther players and supporters know of the changes that would take place within the program over the following few months.

The first change was the graduation of a one-two offensive punch of the numbers one and two all time Powell High leaders in total offense in running back Dy’shawn Mobley and quarterback Dustin McPhetridge. The two spearheaded an offense that would put up over 6,500 yards of total offense on the season, and average over 40 points per game. Add to that the loss of 12 additional starters who had gone 14-1 in 2011, and 25-2 in their last two years, and that would be enough reason for Panther fans to wonder how they could ever be replaced.

Then in February, popular head coach Matt Lowe shocked the fan base when he resigned his position, citing the need to spend more time with his family.

After a nearly two month long search, Powell Principal Ken Dunlap hired Derek Rang, the 27 year old defensive coordinator at Knoxville West, to take the reins of the Panther program. While his resume isn’t long in years due to his relative youth, it is solid beginning with his three state championship rings as a player under the legendary George Quarles at Maryville High School.

After graduating from Maryville College, where he played linebacker for the NCAA Division 3 Scots, Rang started his coaching career at Anderson County High, where he coached under another long time coach with a solid reputation in Larry Kerr. After a year at AC, Rang moved on to South Doyle and became the Defensive Coordinator for 2 years under Clark Duncan, and then the last two years under Scott Cummings as the Defensive Coordinator for the West Rebels. During both of his years as the DC at West, Rang’s defenses helped West get all the way to the state semi-finals, ironically losing at Powell in the semis last November.

After Lowe resigned and the position was advertised, it didn’t take Rang long to jump on the opportunity to apply for the job.

“Programming and tradition is definitely important when applying and analyzing head coaching positions”, Rang said when asked why he felt like he was a good fit for the Powell job. “Powell has a strong tradition of supporting the athletic programs, it is definitely a community school, and is in a position to be a very successful program based on the hard work and support of many people.”

Now that he has been there and seen the team through a spring practice and summer workouts, has that opinion changed any? Not at all, according to the new skipper:

“What I like about the program is the mindset of the kids that they are going to compete and be very successful. Coach Lowe did a tremendous job of instilling a positive mindset in the kids about how to practice, and how to expect to win every ballgame that is played. In my opinion, the program is in great shape. Obviously, many key players are graduated from the past two years, but there is a good, talented core group of players and coaches still at Powell. You can tell the program was run correctly on every level, from the school administration to the wonderful coaches we have in place right now.”

Losing 14 seniors who started the state championship game against Henry County, -including QB McPhetridge – might give some coaches, and especially first year head coaches, nightmares. However, Rang has a special athlete in junior Hagen Owenby to move in from his wide receiver spot of a year ago under center. Owenby was an All District player in 2011, and athletically is as gifted as any rising junior in East Tennessee. In addition to being an outstanding football player, Owenby has been named to the All District 3AAA Baseball Team in each of his first two years of high school. With high school offenses being so dependent on a capable quarterback, Rang fully understand how fortunate he is to have a talented athlete like Owenby to run the show.

“Hagen can definitely play and his skill set is probably a little different than Dustin’s (McPhetridge) was. I think Hagen is a natural competitor, can really manage the game, throw the ball well, but also be a good dual-threat guy back there. Dustin was a big, physical, strong runner but Hagen has all the tools you look for in a high school quarterback and is definitely ready to “break out” this year playing the quarterback position.”

Owenby made the most of his limited snaps at quarterback last fall, rushing for 10.2 yards per rush on 24 carries, scoring two touchdowns. He also completed 68% of his pass attempts (21 of 31), good for 242 yards, three TDs and two 2-point conversions. As a wide receiver he caught 13 passes for 215 yards (16.5 yards per catch), including a TD grab and a 2-point conversion. While not an easy task to replace the 6’3” and 235 pound McPhetridge under center, Owenby certainly does have the skill set to be productive at that position.

At the running back spot, while it is virtually an impossibility to replace the state’s all time single season rushing record holder and holder of eight career and single season school records in Mobley, the Panthers do have a proved running back for Owenby to hand the ball off to in Montario Washington.  At 6’1” and 195 pounds, Washington has the size to go along with good speed and athleticism to carry the load on the ground. As a junior he averaged 6.6 yards per carry and scored three rushing touchdowns in backing up Mobley.

Also in the running back mix will be junior Tyshawn Gardin, a 5’7” and 155 pound speedster, along with newcomer Drew Carter, a junior who moved to Powell from the Memphis area prior to spring practice.

All three looked very capable of stepping in to the running back rotation during spring practice. Up front on the offense line the Panthers return three starters from a year ago, led by Anthony Rivera, a rugged and physical 6’2” and 260 pound senior tackle. Also returning on the O-line are center Harrison Jones and guard Jacob Anderson, also seniors.

Going into fall camp and Owenby moving in to quarterback full time, the four receiver spots are wide open for the taking. Owenby was the only non-senior among the 2011 starters.

Defensively, just three starters return, including Washington at one of the cornerback positions. Also returning are defensive end Shar’ron Moore (5’11” and 220), and the team’s leading tackler a year ago in linebacker Devin Scott. Scott, a 6’ and 195 pound senior, registered 97 tackles in 2011, including four tackles for loss, and six sacks.

While not a starter in the Blue Cross Bowl against Henry County, another important returner is senior defensive back Jonathan Strozyk, whose junior season ended in the Panther’s 8th game of the regular season with a knee injury that required surgery. Even though he played in only 7 ½ of the Panther’s 15 games, the 6’1” and 170 pound senior was named along with Mobley and McPhetridge to the 2011 Class 5A All State team. At the time of his injury, Strozyk had tied the school single season interception record with seven, and he is now tied with his former head coach for the career interception lead with 14.

Strozyk can play both corner and safety, and will also likely see significant action offensively as a wide out and kick return specialist.

Another returning defender with significant experience will be junior safety Dylan Sweat. Sweat started all five playoff games in place of another departed senior, Jonathan Staggs, who suffered a career ending injury in the regular season finale against Central. Sweat, 6’1” and 170, totaled 33 tackles and two interceptions on the year, most of those during the playoffs.

Defensive linemen and linebackers are positions of need as fall practice gets underway.

Among those hoping to catch the eye of Defensive Coordinator David Hawkins at the all important nose tackle position in the Panther 3 man front defensive scheme is junior Brady Scalf. At 6’3” and 290 pounds, Scalf certainly has the bulk to be a force in the middle of the line. With that being one of the deepest positions on the Panther defense over the last couple of years, he hasn’t been called upon yet to step in to a starting role. This year will be his time to prove he is ready to contribute.

With all of those spots to fill and a new head coach, one might expect a bit of a rebuilding year at Powell. Not so, according to Rang, who certainly seems to understand the pressures of coaching at a program with the tradition and support that Powell enjoys.

“Expectations are going to be very high, even thought the team will be quite different from a year ago”, Rang explained to me. “That’s part of the business of coaching at Powell. I think the fans understand that replacing some of the best talent that’s walked the halls in 20 years is going to be tough, but the team just has to try their best to meet the expectations. We are going to coach ‘em up hard and hope the results follow.”

After having had the opportunity to be around Rang for a few months now, it is apparent that he has the passion and fire that is needed to be a successful high school football coach. The only thing he doesn’t have is head coaching experience, but the fact that he chose to retain most of the previous staff should more than compensate for his personal lack of head coaching experience. One of the things that Rang told me in so many words during our initial meeting back in March was that things weren’t broken within the Powell Football program, and they didn’t need to be fixed. The fact that he has stayed true to that word and he has not changed the fundamentals of the program shows me the maturity to stay true to what has proved successful. Given that he played and learned under one of the best high school coaches ever in this state in George Quarles, that really comes as no surprise to me.

With the numbers and quality of the players that the Panthers lost from last year’s team, it would be unrealistic for Panther fans to expect a third consecutive undefeated regular season and District 3AAA championship. That said, however, it would not be unrealistic to expect Powell to challenge for one of the two automatic playoff berths from the district, and at least a wildcard playoff spot in 2012.

Powell opens its season on August 17 at home against Rhea County. Kickoff is at 7:30 p.m. For the eleventh consecutive year, I will have the pleasure of serving as the Radio Voice of Powell Panther Football on AM 620 WRJZ. Our broadcasts begin each week with the Panther Pre-game Show at 7. The broadcasts are also streamed on the internet. They can be accessed at www.PowellPanthersFootball.com.

Powell Panthers Prepare to Open the Derek Rang Era added by design on July 29, 2012
View all posts by design →