By design on December 9, 2012Comments Off on Senator Ellison DuRant Smith of South Carolina 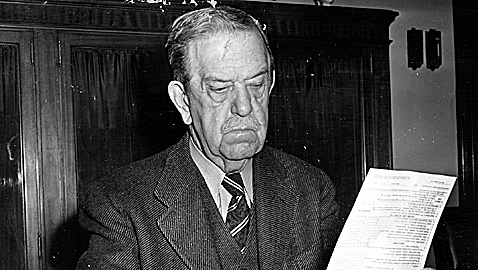 E. D. Smith was born while the War Between the States still raged on August 1, 1864 on the family plantation in Lynchburg, South Carolina.  Smith was the son of a Methodist minister and several of his brothers followed their father into the ministry.  E. D. Smith chose a different path, preferring politics to the pulpit.  Smith attended the University of South Carolina, but graduated from Wofford College.

Ed Smith’s first political office was as a member of the South Carolina House of Representatives, winning election in 1896 and serving until 1900 when he ran an unsuccessful campaign for Congress.  Smith earned his nickname of “Cotton Ed” from having worked in agricultural pursuits and most specifically on behalf of the cotton industry.  Smith was soon traveling all over the entire South, as well as South Carolina promoting cotton.  A product of his times, Smith was an unrepentant white supremacist and would remain so throughout his long career.  One of Cotton Ed’s favorite sayings was, “Cotton is king and white is supreme!”

E. D. Smith was first elected to the United States Senate by the state legislature in 1908.  Senator Smith was regularly reelected by the people of South Carolina for succeeding decades, but his popularity in his home state was by no means universal and he would frequently have to campaign hard to win the Democratic primary, which in South Carolina was tantamount to election in a one-party state.  Smith became legendary during his campaigns for taking credit for those times when the price of cotton was up and blaming Wall Street, Republicans, and nefarious other special interests when the price was down.

Smith was seen as one of the most aggressive advocates for the farmers in Congress.  In fact, Smith was himself an actual farmer, living on and operating the family plantation in Lynchburg.

E. D. Smith was a flamboyant character, an excellent and highly entertaining speaker with an ability to shower ridicule upon the heads of his opponents.  Smith’s views, even at that time, were out of the mainstream of the public and as he aged, he became more and more resistant to change.  Still, Cotton Ed was not hardly the most virulently racist and flamboyant politician in South Carolina, as he pales in comparison with his one time colleague, Coleman L. Blease, who blatantly advocated lynching.  Smith, despite his oftentimes wild pronouncements, came from a distinguished family and could rightly be considered a member of the aristocratic South while “Coley” Blease was the champion of the “wool hat” boys and considerably more common than Smith.

Cotton Ed disapproved of the Republican presidents during the decade of the 1920s and he looked forward to the change in administrations when Franklin Delano Roosevelt defeated Herbert Hoover in 1932.  Smith’s joy at FDR’s election was short lived.  It was not long before Cotton Ed disapproved of both the New Deal and President Roosevelt.  Smith’s long seniority made him Chairman of the Senate’s Agriculture Committee, but much of the New Deal’s agriculture legislation was sponsored by Alabama Senator John H. Bankhead, II in a deliberate attempt to bypass the ornery South Carolinian.

Ed Smith didn’t take himself or the Senate too seriously; he regularly referred to the Senate floor as the “Cave of the Winds.”  Senator Smith referred to the members of his own committee as “butt-heads.” Smith promptly dismissed the New Deal as “the Jackass Age” and watched skeptically as the Federal government grew by leaps and bounds.  Smith naturally disliked Roosevelt’s tolerance of black Americans and was absolutely horrified while attending the 1936 Democratic National Convention in Philadelphia, which saw an African-American minister give the invocation for the first time at a Democratic convention.

Cotton Ed was sitting with the South Carolina delegation on the convention floor when the minister got up to give the invocation and he roared, “*@#damn!  He’s as black as melted midnight!”  Looking at his fellow South Carolina delegates, Cotton Ed proclaimed, “Come on boys, this is no fit place for a white man” and stomped out.

Naturally, the national media confronted Cotton Ed about his having stalked out of the convention and Smith added insult to injury when he declared he had no objection to any minister – – – black or white – – – praying over his soul, but he wasn’t about to stand for a “slew-footed, blue-gummed, kinky-headed Senegambian” praying at a Democratic Party gathering.

While many folks across the country were rightly appalled by Cotton Ed’s comments and antics, the attention given his behavior by the national news media did nothing to diminish his popularity in South Carolina where his views were shared by many, if not most, white voters.  Smith would be frequently asked by audiences to repeat the “Philadelphia story” at his public appearances in South Carolina.

Senator Smith’s dislike for Franklin Roosevelt was cordially reciprocated by the President.  Cotton Ed had been outraged when FDR had attempted to enlarge the U. S. Supreme Court and President Roosevelt had himself been enraged by his proposal having been defeated by members of his own party.  Against the advice of Postmaster General James A. Farley, the political generalissimo of the Roosevelt administration, FDR decided to get even with recalcitrant Democrats by purging them in the 1938 primaries.  Roosevelt stubbornly insisted the Democratic Party should be the liberal party and any officeholder not meeting that criterion should be driven out.  Roosevelt first retaliated against his foes by denying them access to Federal patronage and ignoring requests for projects for their respective states.  FDR’s wrath knew no bounds and having won reelection by carrying every state in the nation save for Maine and Vermont, Roosevelt believed the people would side with him against their own senators and Congressmen.

Franklin Roosevelt targeted some of the most powerful members of the United States Senate for defeat: Walter F. George of Georgia; Pat McCarran of Nevada; Millard Tydings of Maryland; Frederick Van Nuys of Indiana; Guy Gillette of Iowa; and not least of all, E. D. Smith of South Carolina.

The 1938 campaign was perhaps the most famous of Cotton Ed Smith’s long career.  The young Governor of South Carolina, Olin D. Johnston, announced his candidacy for the Senate from the White House steps, which was certainly no coincidence.  A third entrant was State Senator Edgar A. brown, an influential and well known local legislator who had quite nearly beaten Cotton Ed in 1926.  At the time, candidates for the Democratic nomination were required to speak together all across the state.  The seventy-four year old Senator Smith was expected to speak throughout the length and breadth of South Carolina in the company of his opponents, but the old man proved to be up to the challenge.

Smith proved to be remarkably adept at thinking on his feet and his catalogue of epithets to describe his opponents was apparently endless and he subjected both Johnston and Brown to withering ridicule.  Brown regularly bragged to audiences if they would send him to Washington, D. C., he would “bring home the bacon.”  Senator Smith demolished Brown by retorting, “There is no doubt Edgar Brown will bring home the bacon, but the question is… whose smokehouse is he gonna put it in?”  Thereafter Smith routinely referred to “Bacon” Brown, who finally dropped out of the race.

FDR himself appeared in South Carolina, ostensibly on the way back from a fishing vacation, but he made a pointed reference to Cotton Ed, which the Johnston campaign made into an endorsement.  Cotton Ed roared that FDR was meddling in South Carolina politics and insisted he would not be a rubberstamp for any president, FDR included.

To the surprise of many, Cotton Ed won the greatest victory of his political career, beating Johnston badly in the run-off election.  For that matter, Roosevelt’s purge was a complete failure, with every Democrat he opposed being reelected save for Congressman John J. O’Connor in FDR’s native New York.

Smith returned to Washington, his hatred of FDR and the New Deal burning even more brightly, if that were possible.  Senator Smith, his somewhat high-pitched voice contrastingly strangely with his jowly appearance, continued to denounce the New Deal on the Senate floor during his last six years in office.  Despite having served in the United States Senate longer than any other senator in history by the time his term expired in 1944, Ed Smith declared he would run again.  His opponent in the primary was the same Olin Johnston who had lost six years before.  This time Cotton Ed was eighty years old and not as mentally acute nor as energetic as he had been in the past.  As the two men campaigned across South Carolina, Cotton Ed would speak briefly and sometimes had to resort to appearing on the platform, but allowing his speech to be played from a recording.  Cotton Ed lost decisively to the young governor.

When it became clear he had been defeated, Cotton Ed merely told his family he was going outside to “look at the pigs.”  E. D. Smith died just a few months later, dying in the home where he had been born.

TIME magazine once stated Cotton Ed was “a conscientious objector to the Twentieth Century,” which was not an inaccurate statement.  Cotton Ed worked hard for the farmers, but his personal eccentricities and hatreds did not permit him to be an effective member of the United States Senate.