By design on May 20, 2012Comments Off on Seymour holds on for state sectional win in softball 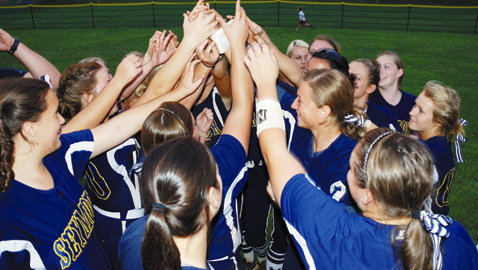 Seymour High’s softball team may have felt like it just stepped off a roller coaster after playing its TSSAA state sectional game against Maryville.

The Lady Eagles were down, then up, then even, then way up, then holding on for dear life in their 9-8 win Friday night at Everett Park in Maryville. The Class AAA thriller lasted around 2 ½ hours and was packed full of twists, turns and emotions.

“When that (final) out happened and I ran and hugged my pitcher, I almost blacked out when she sat me down,” said Seymour coach Dana Carter. “It was just such an adrenaline rush.”

The Region 2-AAA champion Lady Rebels rallied for four runs in the bottom of the seventh inning to pull within one and had the bases loaded with two outs when Seymour junior hurler Carly Lewis fired the ball over the inside corner of the plate to strike out Ciera LaGrange and end the game.

Lewis said she “was really nervous and just shaking” before putting the game-ending strikeout in the score book.

Lewis also had the big hit – a three-run homer to straightaway center – as Seymour (38-7) got on track offensively in the fifth, scoring four runs to take the lead.

Maryville (35-8) had jumped out to a 3-0 lead in the first inning, getting a bases-loaded clearing double from cleanup slugger Haley Hilliard.

The Lady Rebels evened the score at 4-4 in the sixth, but Seymour, bouncing back from its loss to Daniel Boone in the Region 1-AAA finals, struck for five runs in the top of the seventh on Kaitlin Atkins’ two-run single down the left field line and Kerigan Newport’s 3-run homer over the left field fence.

“I had two strikes and she (Allison Barbee) pitched me a change-up, and I was just waiting on it,” said Newport, senior shortstop who bats in the leadoff position. “Right when it came off the bat I knew it was gone.”

Just when it looked like Seymour had its second straight trip to the Spring Fling for this week’s state tournament in Murfreesboro locked up, Newport made two errors on the first play of the bottom of the seventh, booting LaGrange’s grounder and then throwing the ball off target to first.

What should have been a routine out gave the Lady Rebels a spark.

“As the score got closer and closer, I was definitely thinking that (error) could be a big part of how it turned out,” admitted Newport, “but I knew that my team could come through for me and Carly was pitching great. I depended on my team to pick me up.”

Even Newport, who made a key defensive play in the sixth when she tagged out a runner at third, redeemed herself in the seventh when she fielded Hilliard’s grounder and flipped the ball to third baseman Caitlin Cox for the second out.

After Lewis’ game-ending pitch, “I couldn’t even control myself, it was so exciting,” said Newport.

In post-game comments, Newport acknowledged the game could have gone either way. It was “head to head with such a good team … I felt my heart a little.”

“It was a true display of two unbelievable teams,” said the former University of Oklahoma pitcher and UT pitching coach who is now in her 11th season at Seymour. “They both were fighting and scraping and clawing until the bitter end. It’s a shame one team had to lose. These two teams are so good that I wish we could both go to state.”

Seymour went 2-2 and finished in fourth place in its first state tourney appearance last year, beating Munford and Maryville and falling to Soddy-Daisy and Murfreesboro Riverdale.

“Our motto right now,” said Carter, “is win the inning and the rest will take care of itself.”

That certainly turned out to be true in the last inning of the state sectionals, with Seymour outscoring Maryville 5-4 in the nail-biting seventh.

Seymour holds on for state sectional win in softball added by design on May 20, 2012
View all posts by design →