By design on April 14, 2013Comments Off on The Boy Wonder: Senator Rush Holt of West Virginia 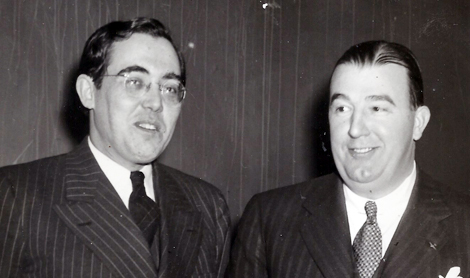 Political success can come quickly and just as quickly be snuffed out.

Rush D. Holt of West Virginia is a prime example of stunning political success at an early age, his electoral career squandered either through insistence upon remaining true to his principles or due to petty feuds and his own eccentricities, depending upon one’s point of view.

Holt was born into a political family as his father, Dr. Matthew D. Holt, was the sometime Mayor of Weston, West Virginia.  Dr. Holt experienced something of a political odyssey leaving the Republican Party when the Democrats nominated the “Great Commoner” William Jennings Bryan for the presidency in 1898.  Evidently even the Democratic Party did not suit Dr. Holt who drifted into the Socialist Party.  The elder Holt’s political and personal beliefs included his own kind of atheism and pacifism.  Both were somewhat exotic beliefs in rugged West Virginia.

Rush Dew Holt possessed a keen mind and graduated from West Virginia University at the tender age of nineteen.  He became an educator, first teaching high school and working as a coach and later became a teacher at Salem College.

By 1930 the political winds in West Virginia were changing; largely having been a Republican state, the Depression was beginning to take its toll and the Democratic Party in the state was led by Matthew Mansfield Neely, who was running to regain his seat in the United States Senate.  Rush Holt was running for the West Virginia House of Delegates although he was only twenty-four years old.  Holt was elected and drew considerable attention to himself as an advocate for the common people, as well as a fierce critic of private power companies.

In 1934 Republican U. S. Senator Henry D. Hatfield (a relation of the famous Hatfield feuding clan) was up for reelection.  A medical doctor and former governor, Hatfield seemed to be a formidable candidate despite the widespread economic suffering in West Virginia.  All of the Republican incumbent Congressmen had been swept out of office with the election of New York Governor Franklin Delano Roosevelt in 1932 and there were a host of Democrats eager to take on Senator Hatfield in the 1934 election.  The notion of a candidate not even old enough to constitutionally occupy the office of United States senator would ordinarily have been laughable, save for the fact Rush Holt’s candidacy attracted the support of West Virginia’s most important Democrat, Senator M. M. Neely.

Amongst the candidates for the Democratic nomination was one Clem Shaver, a former Chairman of the National Democratic Party and a deadly enemy of Senator Neely.  Neely would not countenance a Shaver candidacy, much less run the risk of serving in the Senate with his rival.  Neely, leader of the “Federal” faction of West Virginia’s Democratic Party, threw his open support to young Rush D. Holt and he brought perhaps the most potent factor in a Democratic primary with him: the support of organized labor.  Holt crushed his opposition in the Democratic primary, which included not only Clem Shaver, but also former U. S. Senator William E. Chilton, who was also the owner of one of Charleston’s daily newspapers.

Rush D. Holt defeated Senator Henry Hatfield in the general election and being only twenty-nine, had to wait six months before taking office.  Having run as an all-out supporter of President Franklin D. Roosevelt, Holt took his seat in the Senate where he initially supported FDR and the New Deal, although many believed Holt’s own views were more extreme than those of the President. Not content to serve as a junior member of the Senate, Holt soon chaffed under the arrangement, which gave Senator Neely the lion’s share of patronage in West Virginia.  Holt’s dissatisfaction led to an open break with both Senator Neely and the New Deal.  Rush Holt, long believed to harbor many of his father’s own socialist views, was soon a vocal critic of the New Deal and perceived as a conservative.  Holt repaid his mentor Matthew M. Neely by opposing his Neely’s reelection to the United States Senate in 1936.  The feud became so bitter the long-suffering Neely, a powerful and mesmerizing orator of the old school, denounced his young colleague as a “sewer rat” and that might have been the nicest thing Senator Neely said about Rush D. Holt.

Neely was easily reelected, but Senator Holt continued to be a leading opponent of the New Deal and became a spokesman for the strong isolationist feeling in the country prior to World War II.  An uneasy President Roosevelt was trying to do all he could to aid Great Britain against the Nazi onslaught, which was about to bring the British Empire to its knees as the war began.  At that time, Hitler and his legions seemed unbeatable and most of Europe was under the boot heel of the German army.  Senator Holt augmented his income by speaking all across the country for handsome fees while promoting the cause of America tending to its own business and leaving Europe to sort out its own affairs.  Holt favored a policy of absolute neutrality by the United States and strongly believed war was oftentimes only in the best interests of the wealthy munitions manufacturers.

When his Senate seat came up for reelection, Rush D. Holt insisted upon running again, although there was every reason to believe he was no longer popular with his constituents.  Senator Neely was leaving the Senate to make a bid for governor, which would eliminate the opposition of the state house machine to Neely’s control of the state Democratic Party.  Neely recruited a little known local judge to challenge Holt in the primary.  The primary was a three-way affair as the leader of the state house machine, former Governor H. Guy Kump was a candidate for Holt’s Senate seat.  As Neely and Kump battled for the heart and soul of West Virginia’s Democratic Party, Rush Holt was little more than an irritant.  Judge Harley Kilgore, Neely’s candidate, won the senatorial nomination while Neely himself was nominated for governor.  Neely had succeeded in vanquishing both his most formidable foes, Rush D. Holt and H. Guy Kump, in one election.

Senator Holt seemed to live quite well in Washington, having a valet and sumptuous apartment.  That lifestyle ended abruptly when Holt was defeated for reelection.  For the rest of his life, Rush Holt would scrape out a living as a writer and lecturer.

After his defeat, Senator Holt continued to live in Washington, D. C. still a featured speaker at many America First rallies across the country until the Japanese bombed Pearl Harbor, which had the effect of killing isolationism in the United States.

Rush Holt returned to Weston, West Virginia where he remained popular and he returned to the House of Delegates.  From his base in Weston, Holt continued to make quixotic campaigns for statewide office.  Holt sought the gubernatorial nomination in 1944, but lost to Governor Matthew M. Neely’s hand-picked successor.  When Neely sought to return to the United States Senate in 1948, Holt ran in the Democratic primary to challenge him unsuccessfully.

By 1950, Holt’s political metamorphosis was complete and he had become a Republican.  Holt was nominated to run for Congress by the GOP that year and made an impressive showing.  In 1952, Rush D. Holt was the Republican nominee for governor and he quite nearly won.  Amidst charges of voter fraud, Holt was narrowly edged out, while still running ahead of hugely popular General Dwight D. Eisenhower, the GOP nominee for President.

Holt remained in the West Virginia House of Delegates, but after his failed gubernatorial campaign he discovered he was suffering from cancer.  Holt’s long-time political enemy Matthew M. Neely, himself a cancer survivor, relented to assist Holt in getting excellent medical care.  Despite being reelected to the West Virginia House of Delegates in 1954, Holt lost his battle with cancer and died on February 8, 1955.  Rush D. Holt was only forty-nine years old at the time of his death.

Holt’s mark on West Virginia politics extended beyond his death.  His widow, Helen, was appointed by Republican Governor Cecil Underwood, to serve as Secretary of State in 1958.  Although she lost the election to succeed herself, Helen Holt ran ahead of her ticket mates.

Rush D. Holt, Jr., son of Rush and Helen Holt, entered politics in New Jersey, returning to his father’s roots as a liberal Democrat.  The younger Holt continues to serve in Congress to this day, although he seems to have very little to say about his father.

Had Rush D. Holt chosen to work along side Matthew M. Neely, he would very likely have continued to serve in the United States Senate until his death.  Holt’s personality was such that he enjoyed the notoriety of his feuds and he relished the verbal injuries he heaped upon just about everybody who had helped him climb the ladder of political success: Neely, organized labor and the New Deal.  Holt left a political legacy of family, but little else.

The Boy Wonder: Senator Rush Holt of West Virginia added by design on April 14, 2013
View all posts by design →